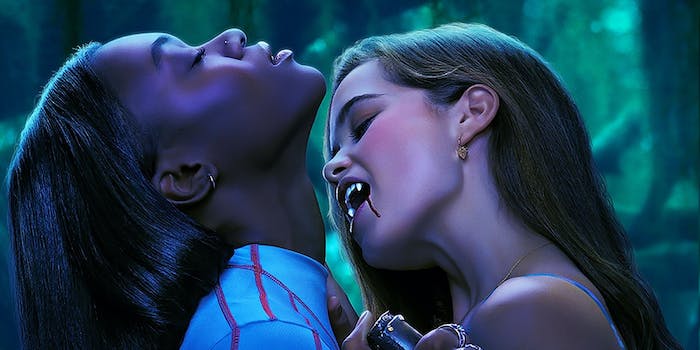 'First Kill' fans are pointing out that it had higher ratings than 'Heartstopper,' which was renewed for a second season.

Just two months after season 1 arrived on Netflix, the YA vampire show First Kill has been canceled, inspiring immediate backlash from fans. People are particularly frustrated due to First Kill’s status as a teen show with lesbian protagonists; still a rare commodity on TV.

Telling a forbidden romance between two teenage girls—one a vampire, the other a vampire hunter—the show earned mixed reviews but quickly attracted a fanbase. When the cancellation news broke on Tuesday night, these fans made their voices heard on Twitter, highlighting the fact that First Kill has a Black lesbian lead, and that Netflix has a history of cancelling projects featuring diverse casts and/or queer characters.

Several fans brought up First Kill’s viewing figures, which are higher than Heartstopper’s—a more high-profile YA Netflix show that focuses on a romance between two boys. Netflix’s current ratings system relies upon “viewing hours,” with First Kill garnering 30.3 million hours in its first week. This is slightly less than Bridgerton season 1 (32.3 million) but more than Umbrella Academy season 1 (27.2 million).

By comparison, Heartstopper clocked in at 14.5 million viewing hours in its first week, and it was still renewed for two more seasons.

However, in their second week, First Kill’s viewing numbers dropped by about 60% while Heartstopper’s rose significantly, reflecting its positive media attention and word-of-mouth buzz. So while First Kill still got better stats overall, Deadline described it as lacking the “staying power” of other Netflix hits. According to a streaming data expert on the tracking site What’s On Netflix, this second-week drop is probably why First Kill got canceled.

Netflix’s internal metrics are notoriously obscure, making this kind of cancellation even more annoying to fans. “Viewing hours” aren’t the same as traditional broadcast TV ratings—and they’re clearly not the only metric of success, because some shows get canceled for reasons that even the showrunners don’t understand.

Some renewal decisions are inspired by the vagaries of the Netflix algorithm; others are fallout from broader strategic changes at the platform. Fresh Kill’s cancellation is supposedly due to ratings, but considering the confusing way those ratings are announced to the public—and the inexplicable nature of some other Netflix cancellations—it’s no surprise that fans are angry.