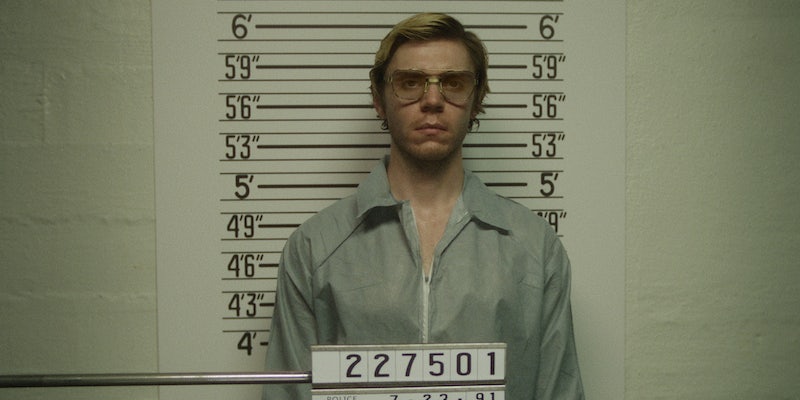 Some Netflix users were offended by the choice to place 'Monster: The Jeffrey Dahmer Story' alongside queer TV dramas like 'Heartstopper.'

Ryan Murphy’s new Netflix drama, Dahmer – Monster: The Jeffrey Dahmer Story, is predictably controversial. Highlighting ethical concerns about dramatizing a real-life tragedy, the series faced pushback from the family of one of Dahmer’s victims, who said Monster retraumatized them. Now Netflix is responding to backlash from another angle, after being criticized for placing Monster under the “LGBTQ” tag.

If you interpret Netflix’s tags as a purely practical filing system, then this tagging choice makes sense. Dahmer was gay, and preyed upon queer men, escaping prosecution for a long time due to homophobia in the criminal justice system. The series undeniably covers issues relating to the LGBTQ+ community. However, by tagging Monster as LGBTQ, Netflix put a gruesome true-crime drama alongside shows like Heartstopper and RuPaul’s Drag Race. Some subscribers naturally found this offensive.

Monster’s presence on the LGBTQ tag was criticized on social media, with some Twitter users calling it “absolutely gross” and “wrong.” Meanwhile, there are several popular TikToks mocking Netflix’s tagging choice—for instance, this viral clip of a TikToker sarcastically dancing in front of a rainbow flag, captioned, “netflix after adding the Jeffrey Dahmer series to the LGBTQ+ tag.”

Another viral TikTok questioned Netlfix’s tagging choice in more serious terms, saying, “This is not the representation we’re looking for.”

According to a report from Variety on Wednesday, Monster has now been removed from the LGBTQ tag. It’s currently tagged as “ominous,” “dark” and “horror,” categorized under the genres of “crime” and “social issues drama.”

The response to Dahmer – Monster: The Jeffrey Dahmer Story has been genuinely mixed so far. TV critics were underwhelmed, and the show has sparked a lot of discourse about the relationship between pop culture and serial killers, raising concerns about turning Dahmer’s crimes into entertainment. For instance, there’s already a stark divide between viewers who took the show seriously and those who watched in a more lighthearted manner, inspiring debate about whether it’s okay to make jokey TikToks about the show.

At the same time, Monster has attracted massive viewership ratings according to Netflix’s internal metrics, along with earning an impressive 4.0 average score from viewers on Letterboxd—the highest for any Ryan Murphy project aside from Feud. So while the backlash around Monster is very visible, it’s not noticeably harming the show’s popularity.