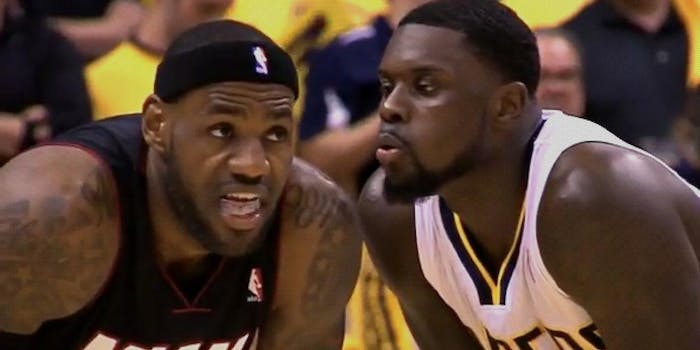 "Let me whisper in your ear."

It was the breath of semi-fresh air the Indiana Pacers needed to seal a win.

Near the end of game 5 of the NBA’s Eastern Conference finals, the Pacers had a slim lead over the Miami Heat. The reigning NBA champions were up 3-1 and looking for a trip to the championship.

During a stoppage point in the game, Pacers shooting guard Lance Stephenson leaned into face of LeBron James and gently blew in his ear. The moment, and James’s reaction, were priceless.

It was also exactly what the Pacers needed.

The Pacers ended up winning the game 93-90, staving off elimination.

Stephenson contributed 12 points, five rebounds, and five assists and inspired the Twitter and Instagram community to create a series of remixes.

You guys are out of control!!!!! LOL pic.twitter.com/5HOSCEdodQ

The Best Lance Stephenson Blowing Photoshops on Twitter (keep tagging us in new ones) https://t.co/32xGF3eq0F pic.twitter.com/dwIZRPVplg