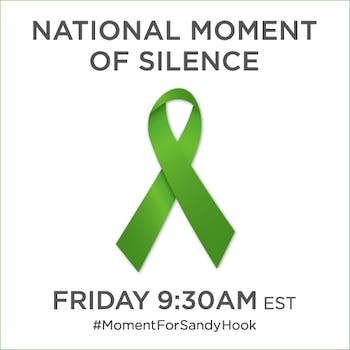 Nation takes moment of silence for Newtown at 9:30am Eastern

Celebrities and even websites are joining in on the five-minute reflection for Sandy Hook victims.

A week after 20-year-old Adam Lanza walked into a Connecticut elementary school and shot 26 people, including 20 children, a moment of silence will be held across the country and online Friday morning.

According to SocialTimes.com, Governor Dannel Malloy called for the moment of silence at 9:30am Eastern on Friday in memory of those who died. Meanwhile, celebrities and online leaders are suggesting people do the same on the Web.

On Thursday, the hashtag #MomentForSandyHook was taking off, and according to Topsy.com, it was mentioned more than 6,000 times.

A petition on Causes.com was also pushing for the online moment of silence and even encouraged people to put a commemorative badge on their website. It reads, in part:

“At 9:30 a.m. EST, spend several minutes reflecting quietly on this terrible tragedy and take a five minute pause from all online activity. In the coming weeks and months, we must come together around common-sense solutions that will prevent the gun violence that has become all too frequent in communities across the country. 2013 is the year to take meaningful action; observing this moment of silence on Friday, we can signal our resolve to stop senseless deaths like these from happening again.”

By Thursday night, more than 161,900 people had signed on to the pledge, including Ryan Seacrest, Britney Spears, MC Hammer, Joe Montana, and Arnold Schwarzenegger.

The Daily Dot will be observing the moment of silence.

Correction: An early version of this story listed the moment at 7:30am in the headline, which has since been corrected.