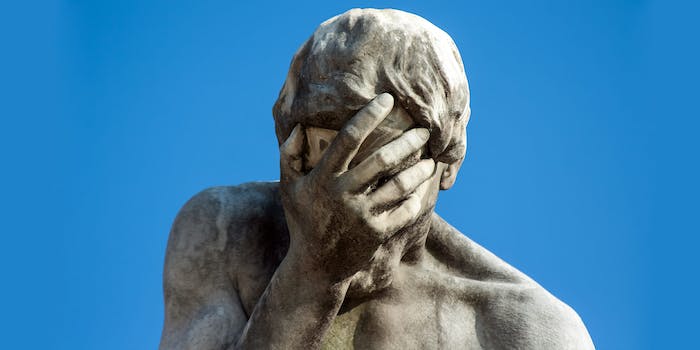 Museums from around the world got in on the fun.

The #MuseMeme hashtag as arrived to let everyone know that museums aren’t just for school field trips and second dates.

The trend seems to have started in the U.K. on Wednesday, but museums around the world began using the #MuseMeme hashtag, not only to show off their collections, but to give patrons a peek at life behind the scenes in the museum world.

The results are every bit as nerdy and wonderful as you might hope.

Today is all about the #MusMeme

Be prepared for all of our weird memes and bad puns throughout the day pic.twitter.com/ahFCj8i8kt

"Thank you for visiting. The museum is now closed." #MusMeme pic.twitter.com/qbeBUDv7Gk

When you're wearing socks and you step on something wet #MusMeme

When you get an email saying there’s leftover food from the board meeting in the breakroom #MusMeme pic.twitter.com/9iYODgEKO8

If you then you don’t
don’t love deserve
me at my me at my#MusMeme pic.twitter.com/VADHYusvXr

Happy #MusMeme day! Have you ever created any memes with objects in our collections? If so, be sure to share them with us today. Sculpture from Italy c. 1518 pic.twitter.com/DcdF9epNQ5

and I'm falling asleep
and she's calling a cab
while he's having a smoke
and he's also a crab #MusMeme pic.twitter.com/cgWoBUn8Wy

You vs the tank they told you not to worry about #MusMeme pic.twitter.com/awETeLlfES

Museums not only used items from their own collections, but embraced some classic meme formats.

It's #MusMeme day, and to be honest we can't think of a better meme than this one by @msimanchester pic.twitter.com/fwC5Mk58e4

Seeing as though it's #MusMeme day we had to share this classic meme from the Castle with you! #HeverCastle #DistractedBoyfriend #Memes pic.twitter.com/MW2S6Cpf6o

Most of our museum team have had this conversation at some point.https://t.co/rxRn3XB6E2#MusMeme pic.twitter.com/mAmTDfEKJQ

And, obviously, people weren’t going to let the museums have all the fun. It wasn’t long before everyone started getting in on #MuseMeme.

This is my absolute favourite ever.
I'm supressing the temptation to post any more.#MusMeme pic.twitter.com/ZrGAMC6zX7

When you finally decide to take the 27 pieces of Tupperware hiding under your desk home #musememe pic.twitter.com/bRU2mSA71H

These memes are all amazing and hilarious, but the most amazing part is that there’s most likely a museum somewhere close to you with either cheap or free admission. You can see everything from 1,000-year-old statues to contemporary works of art by members of your own community.

For the love of god, just don’t touch anything, they hate that.

The #MuseMeme hashtag was a special one-day event, but don’t feel bad if you missed the fun. The next #MuseumSelfie day is January 17 and you have plenty of time left to prepare.