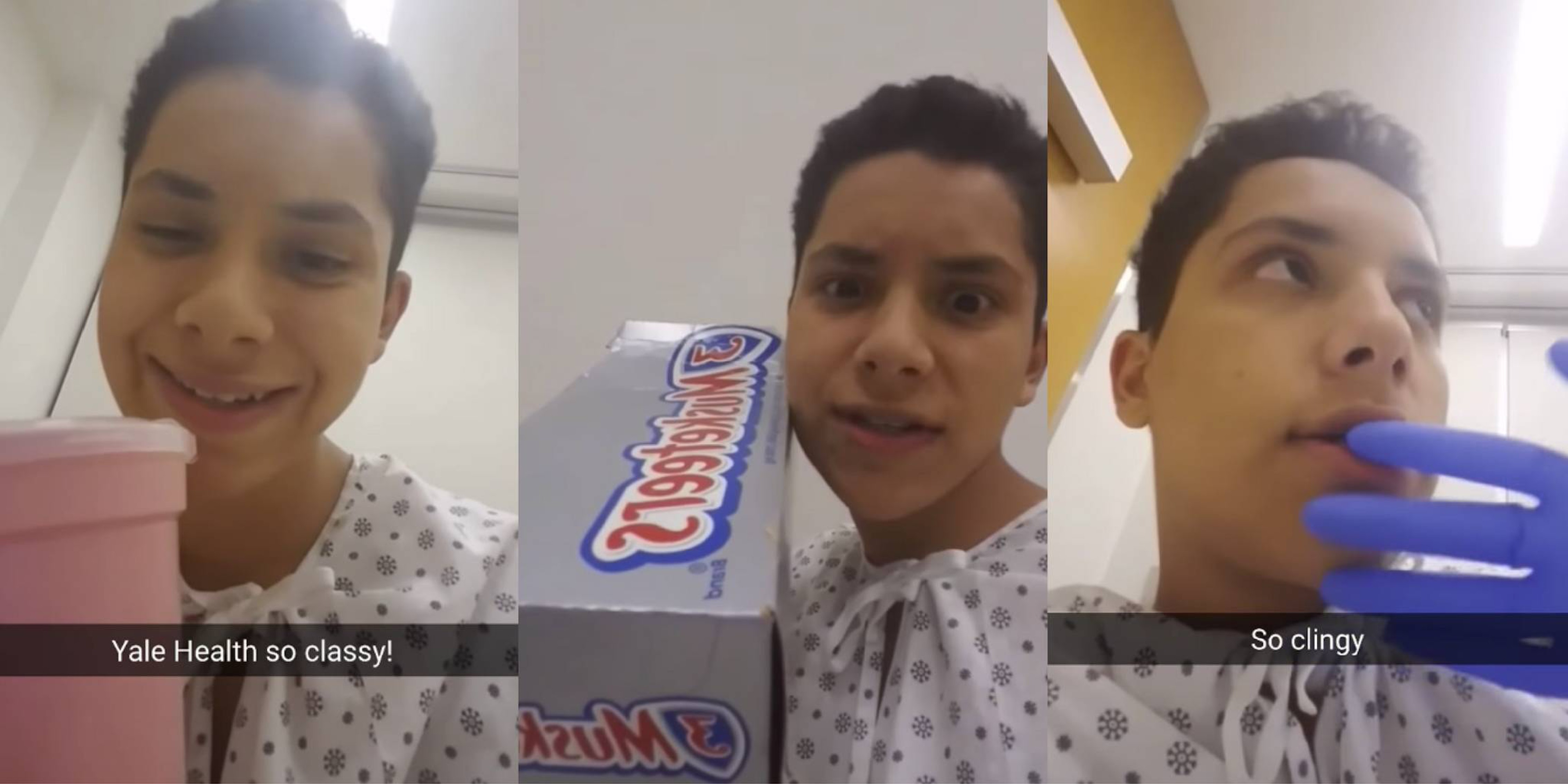 When Yale University freshman Tarek Ziad was stuck in mumps quarantine for five days, he had access to little more than an inaudible TV, boxes of medical gloves, a pillow, and a value pack of 3 Musketeers chocolate bars.

With the help of his smart phone, however, Ziad made the best of a shitty situation to create a Cast Away-caliber masterpiece that deserves a Golden Globe award of its own.

In a nearly seven-minute-long Snapchat story (spanning five days), now uploaded to YouTube, Ziad entertains himself and his social network with the inanimate objects in his room.

From being BFFs with an apple sauce cup, a gay pillow, and an inflated latex glove named Sally, to critiquing the pros and cons of his own mumps bunker, Ziad’s story is quite possibly the strongest example of turning lemons into lemonade.

“I’ve got to say, if there’s one thing Yale Health has going for it it’s the abundance and variety of containers—we’ve got this pink container, and then this slightly smaller…” Ziad compliments before getting cut off in one snap.

“You know, in this room, nothing else really matters. Donald Trump can be president and that won’t really get me in this room. You could all die—I wouldn’t know,” Ziad waxes poetic in another.

Ziad told the Daily Dot that, yes, he was able to preoccupy himself with other tasks when he wasn’t making fun of the furniture in his make-shift doomsday pod.

“Yeah, it was a little rough being quarantined two weeks before finals. But I got a lot of help from my college dean and teachers with getting all my work in,” Zaid wrote via Facebook Messenger. “Basically I just slept, ate, did homework, or went on my computer (I was able to have a visitor bring my laptop).”

According to Yale News, Ziad was one of two students on campus suspected of having mumps in November. He visited the campus health clinic on Nov. 28 when the left side of his face became swollen, then was placed in quarantine for five days. After the quarantine ended, Yale Health found Ziad’s mumps test results were “inconclusive.”

“They were not able to grow the virus from my sample, but they said sometimes tests can not work and that they’re pretty sure I had mumps,” Ziad said. “I never heard anything else.”

On Dec. 17, Ziad posted the video of his story to Facebook and made light of his recent Bubble Boy experience.

“I don’t ever post things online. Lots of people just really liked my Snapchat story so I figured I’d save it,” Ziad said. “Then people kept wanting to see it who missed it, so I uploaded it.”

Though Ziad’s Snapchat story is creative and entertaining, he told Yale News that other students lashed out at him for contracting the virus. In a Facebook group for Yale students, Ziad shared that he was the student who contracted the mumps and had received both doses on the mumps vaccine as a child, but the internet felt otherwise.

“I was hurt by people saying, ‘If you’re not vaccinated, don’t come anywhere near me’ or ‘How dumb could you be to not get vaccinated,'” Ziad told Yale News. “I think it’s very easy to say stuff like that if you’re uninformed or you don’t know the person dealing with it.”

Despite the distress, Ziad’s isolation was a great learning experience, even right before taking finals that semester.

“Let me tell you guys, you learn a lot about yourself by never leaving the same room for five days—like I learned that I have a slight predisposition for insanity,” Ziad cheers in one snap. He goes on to say, “But you know this was all actually worth it because I got these great socks! Um, and also years of mental scarring.”