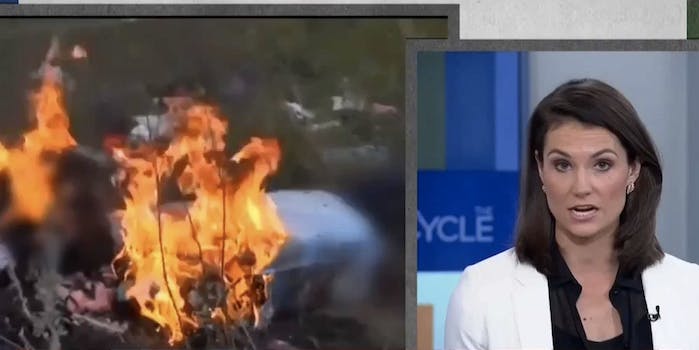 Facts are still sketchy in the aftermath of the MH17 tragedy, in which a Malaysian Airlines plane was shot down over Ukraine, killing all 298 passengers and crewmembers on board. News crews are scrambling desperately to gather facts and, in their urgency, occassional mistakes are made. Few mistakes are so striking, however, as a screw-up by MSNBC, in which a prank caller managed to slip through the net and appear live on air as a military expert and “witness” to the event.

Speaking to Krystal Ball on The Cycle, the unidentified prankster recounted what he “saw”:

“I was looking out the window and I saw a projectile flying through the sky, and it would appear that the plane was shot down by a blast of wind from Howard Stern’s ass.”

Whether she misheard or merely determined to ignore the remark, Ball pressed on, asking for more details. “So it would appear that the plane was shot down. Can you tell us anything more from your military training,” she asked, “or what sort of missile system that may have been coming from?”

“Oh, you’re a dumbass.” was the response.

After that comment, the interview was swiftly halted. The prank was in pretty poor taste, but it does raise the question of what due diligence is being done on MSNBC’s phone-in guests. If this phony “sergeant” can manage it, what’s to stop it happening again?