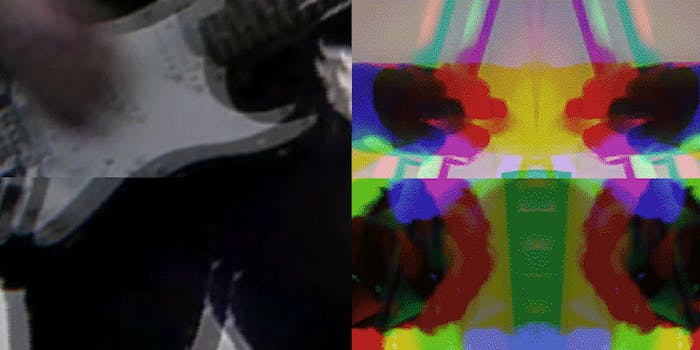 Gustavo "g1ft3d" Fajardo glitches up the first music video from the album, which was released yesterday.

The days of lavish music videos featuring musicians popping bottles of Cris aboard yachts with bathing beauties is long over.

Music videos have gone the way of the radio star, and this time it’s YouTube who’s pulled the trigger.

Thankfully, music videos haven’t flatlined completely, and a growing number of aspiring musicians are crowdsourcing the production of their own videos for next to nothing.

One of these people is electronic artist Beatastic. Over the past month, the UK-based musician partnered with glitch GIF artist Gustavo “g1ft3d” Fajardo to turn the debut video from his latest album, GL1TCH3S, into GIFs. (Take a listen to the first track off the album, “Glitchy,” below.)

“I see a lot of diversity of colors, values, sounds, ambiences and emotions in this album,” Fajardo told the Daily Dot. “It’s very rich. Anyone can have their own moment or feeling by listening to it, and definitely one can relate to most of the songs because it’s really fresh and has a very natural sound.”

To capture these emotions, Fajardo, of Guatemala, stripped the video “LCTR” down to its most visually appealing moments and glitched them up. Glitch art is the process of altering photos or videos to make it seem as if a technical error has occured. This often involves inverting colors, warping portions of an image, or adding elements like lines.

Although Fajardo’s six different GIFs have yet to capture a lot of attention on Tumblr, Beatastic’s album is already beginning to collect buzz.

“The opening track ‘Glitchy’ kicks off the album to a great start with its blend of techno and indie-rock, foreshadowing the diversity of genres inspired in the making of this record,” Torches Magazine wrote. ” From listening to ‘GL1TCHES,’ one can tell that Beatastic is one talented man who is fearless when it comes to his love of music.”

Check out one of Fajardo’s GIFs below and visit Soundcloud to hear more of Beatastic’s bumping tunes.