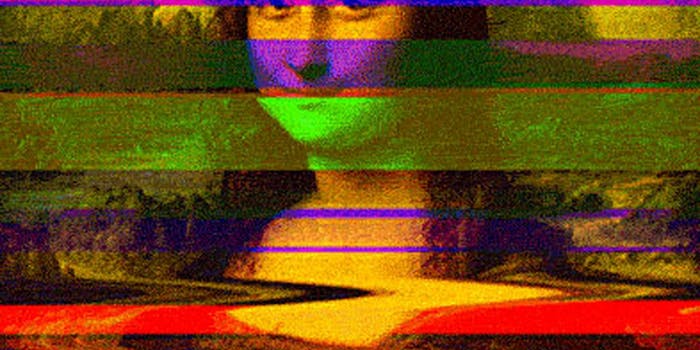 GIF artist Gustavo Fajardo has an appetite for destruction.

Nobody quite knows the true inspiration behind Andy Warhol’s iconoclastic Campbell’s Soup Cans.

Some people say he created the silkscreen canvases because his mother fashioned tin flowers out of the cans. Others say he just liked eating Campbell’s Soup.

Artist Gustavo Fajardo was drawn to the idea that Warhol created the cans because he wanted to focus his attention on something new—a feeling he replicated by using Warhol’s cans to create his own unique series of glitchy GIFs.

“I’ve been inspired by tons of great artists,” Fajardo told the Daily Dot. “I believe that any media can be used to create art. I dislike old-fashioned academy teachers who say that if you don’t work the way they did back in 1,500 BC it is not art. I want to prove that you can make art with new media.”

Fajardo’s medium of choice has been glitch art. The term “glitch” has been around since 1962, when it was used by NASA to describe a technical error or problem, according to Iman Moradi’s dissertation,“GTLCH AESTHETICS.” In terms of digital photographs, these errors can manifest themselves as drastic color changes, vertical lines, or a complete deconstruction of the image.

It’s this sort of randomness and surreal nature that attracted Fajardo, 29, to the art form—especially when paired with GIF animations.

“I believe sometimes creativity gets stuck because you have this belief that art can only be made by traditional techniques and media, but a whole new universe expands to you when you realize that every single little thing around you can be used to create art. …

“From a very personal level I relate glitch art with a quote from Fight Club: ‘I felt like destroying something beautiful.’”

Over the last nine months, Fajardo has created more than 110 different animations for his Tumblr and Canvas accounts. And like any great artist, he’s has gone through a series of artistic periods. They include the surreal, real-life scenes from around his home in Guatemala City, and pop art. But it’s his glitch GIFs inspired by animals that he’s particularly proud of.

“I wanted to create a very romantic and natural set of images,” he said. “I’m currently living in Guatemala, and this place is filled with a beautiful fauna. No matter where you go, not even if it’s in the city or in the countryside, you will find gorgeous animals just walking around near you. I wanted to take the beauty of animals walking (or flying), their natural and graceful movement.

“For me it is almost as beautiful as ballet. I added some colorful textures that I was working on with watercolors and some fabrics that are part of Guatemala’s culture. I love to play with textures and different hues.”

Fajardo has been creating a series of glitch GIF portraits over the last month. But he’s not through “destroying” some of the world’s most beloved pieces of art.

“Someday, in the future, I’m sure we will see a digital/virtual artwork as important as the Mona Lisa,” he said. “I use GIFs to make art because I want to tell the world that a GIF can also be an iconic piece of art. The evolution of art media also reflects the evolution of our creativity and the evolution of ourselves.”

And sometimes, as Fajardo’s work illustrates, there’s beauty in the breakdowns in between.