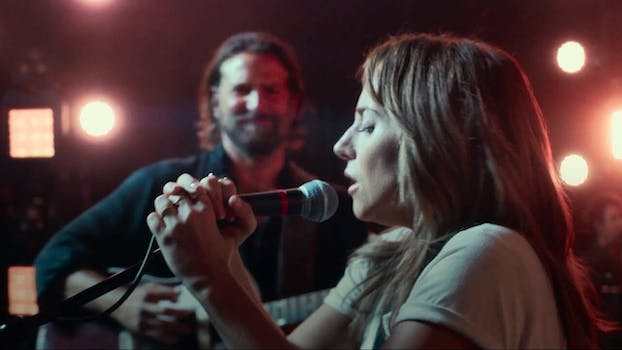 Lady Gaga is starring in her first major movie role as fledgling recording artist Ally in A Star is Born. The movie is making its theatrical debut on Oct. 5, 2018. That’s right, it’s not even out yet. There’s a whole month left until we can let Gaga (opposite Bradley Cooper) serenade us as the young musician Ally.

And yet, there’s already a veritable treasure trove of memes out there surrounding the movie.

So far, there’s only footage from the official trailer out to actually pore over. But Gaga stans on Twitter and across the internet have already been hard at work making quality A Star is Born memes that the masses can be proud of.

In case you’ve been out of the loop, A Star is Born is a musical romantic drama directed by Bradley Cooper himself, and it happens to be a remake of the 1937 classic. This isn’t the first time it’s been remade. You may remember a little 1954 version starring Judy Garland, or the 1976 rockin’ odyssey with Barbra Streisand and Kris Kristofferson. This is Gaga and Cooper’s take on the tale, which follows a musician who happens upon (and promptly falls in love with) an up-and-coming singer.

There are plenty of familiar faces in it, such as Dave Chappelle and Andrew Dice Clay, and it’s already courting early Oscar nods from critics across the board. It’s currently celebrating universal acclaim on Metacritic, which is great news for Gaga fans looking for Mother Monster to really sell her career as an actress. (Is there anything she can’t do?)

A Star is Born is such an important trailer. It’s got everything you need: romance, Gaga, Bradley Cooper, drama, a fledgling singer, memorable lines…and plenty of meme-ability.

Now, there’s no denying the movie looks ah-mazing already. We got a taste of Gaga’s acting abilities when she starred in American Horror Story: Hotel and all too briefly in the abysmal Roanoke season, but this is her first time as a Hollywood lead, and everyone is here for it. Like, you don’t understand. All the way here for it, and it’s all based on hype, for the most part. Most people haven’t even seen this movie yet!

Several video memes incorporate the “haaa ah ah ah” wail Gaga belts out in the trailer during “The Shallow,” an original tune written by Lady Gaga herself and performed alongside Bradley Cooper in the film. It’s seriously gorgeous, but that doesn’t mean we can’t poke fun at those wailing, banshee-like vocals in a very specific part of the song.

YOU: what’s your favorite album?
ME: pic.twitter.com/XeCqoc86eQ

There’s one particular part of A Star is Born trailer where Cooper’s character Jackson Maine rolls by Gaga’s Ally once, then comes back by to “take another look” at her. It’s positively adorable, and Ally’s response to Maine’s drive-by double-take has people swooning.

Naturally, that moment has inspired a lot of memes.

In particular, people love using Ally’s facial expression in response to Maine’s words as a positive reaction. It’s a lot like the whole Drake “Hotline Bling” memes that continue to float around the internet on a daily basis.

when the first review is a rave pic.twitter.com/tpUbqbdm6l

Fans aren’t just creating their own memes surrounding the trailer’s memorable moments, but they’re also incorporating others, such as “Galaxy Brain“:

Memes aside, the movie sounds like it’s going to absolutely blow us away.

A STAR IS BORN: Those chills we get from the trailer were not a drill, there’s plenty to go around in the movie, too, namely every time Lady Gaga starts singing. She shines pretty damn bright, and Bradley Cooper has never been better. #TIFF

lol A STAR IS BORN is so good

A STAR IS BORN totally had me! then it kinda lost me. then it totally had me again! but Lady Gaga is *unreal* the whole time, and lol Bradley Cooper commits to his Buffalo Bill voice the whole time and has apparently never heard of a wide shot. We’re all in the shallow now, baby! pic.twitter.com/ofz0VaVIqW

A STAR IS BORN will win Best Picture.
Haven’t been this certain on a #TIFF call since I called it for THE ARTIST a few years back. I feel just as sure with this.
It could even sweep the board at the #Oscars. I don’t think it will, but the potential is there.
Splendid movie. pic.twitter.com/526xYaVgHc

I’d like to formally apologise for ever doubting that Lady Gaga is absolutely out of this world. A STAR IS BORN celebrates the woman, as it should – along with every noble ambition of love and music and patience and loyalty, bursting with pain and wonder #TIFF18

Lady Gaga's greatest strength as an actress, at least to judge from A STAR IS BORN, is that she's a marvelous listener and reactor. She hangs on every single word Bradley Cooper says like she can't wait to hear what's next. Even many veteran actors can't manage this!