We like our willfull ignorance. Why would we want an ugly device telling us otherwise?

I’ve had glasses since I was seven years old. Contacts since 10. And one of the reasons I’ve never gotten laser eye surgery is because of my bedroom alarm clock.

In addition to my virtual blindness, I also have problems falling asleep and staying that way. The clock sits across the bedroom, well out of squinting range.

Because I don’t like to know how things really are, outside my head. I don’t want to hear my own voicemail greeting. I don’t want to see myself in anything but a properly lit mirror. So even with the clock across the room, if I’m tossing and turning, I obviously know it’s getting very late—but I can pretend it’s not. 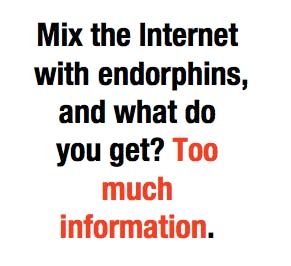 Denial? Maybe. But there is such a thing as too much information.

This week, I’ve been reading a lot about wearable computing. Google Glass has been delayed till 2014, despite the number of apps being prepared for it. It doesn’t matter, though, because by next year we may all have computers integrated into our bodies. Turn your own person into a hotspot (Personal Area Network, or PAN)! If you paranoids think that cellphones are giving you cancer…

But alright, I’ll admit it. I have a Garmin. I use it when I run. I probably use it too much, because I’m starting to fall into the trap of “If I Didn’t Download It, It Didn’t Happen.”

However, I only download my own run data for my own edification—and most of the time I forget about it once it’s off the device. I don’t share anything on Daily Mile or on Nike+, because what the hell is the point of that? Compete with strangers? I play too much Words With Friends as is.

You mix the Internet with endorphins, and you know what you get? Too much information.

I don’t have a Jawbone Up. I don’t have a Fitbit (in part because the name sounds like “phhbbbt,” e.g., the sound of giving up). Because: Why? Why do I want every breath, step, fart, blink, snooze, etc. measured and categorized? Why would I need to be constantly monitored? I already have one mother.

Do these wearable devices actually keep you honest? Active? Fit?

I think these devices just add another layer. A layer of shame. They are the electronic equivalent of a New Year’s resolution gym membership by February 9th. 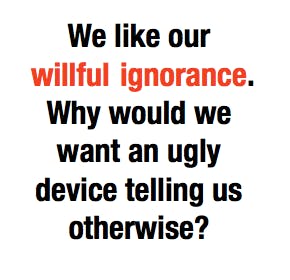 The reason these things haven’t taken off yet isn’t because they’re ugly. (They kinda are fug, though. They remind me of the Casio calculator watches the junior high school boys who picked their noses and wiped it on their desks had.) Even the devices that try are trying too hard, and they all look like props from Star Trek. (That’s not a compliment.)

No, it’s not the appearance.

Why do you think the nutrition label on a pint of Ben & Jerry’s is split into four servings? Do you know anyone who actually spoons out a pious half-cup and pops the carton back in the freezer? (Yeah, those are the same people who eat half a side salad and whine that they are so full. They don’t count. There are issues there.)

But if the label showed the actual portion size? No one would buy it.

Or maybe they would, and they wouldn’t care. (Like in New York, where calorie counts are posted, people don’t give a shit.)

Because who doesn’t know that a Cinnabon the size of your head isn’t flooded with calories? Or that a pile of bleu cheese, a pillowcase of bacon bits, and a cauldron of ranch dressing do not a salad make? Wondered about wrapping your taco in a waffle? Now, you can!

It doesn’t matter what the calories are or where they’re listed. That shit still gets eaten.

Because we don’t want to know.  We like our willful ignorance. Why would we want an ugly device telling us otherwise? We want to pretend we’ve had a good night’s sleep, we want to pretend that sitting on the couch is making us healthier, we want to pretend the peanut butter jar has been emptied out by evaporation in the fridge instead of our depressed, oversized nighttime spoon.