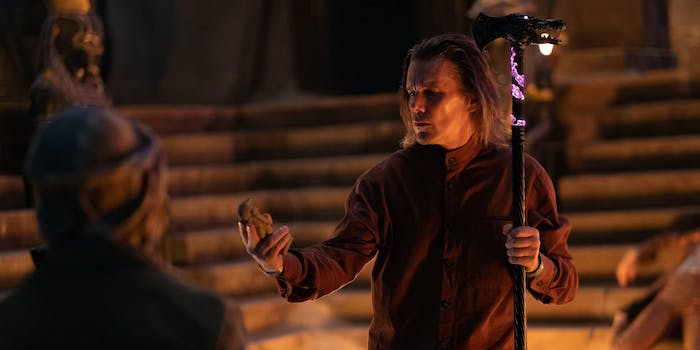 After five MCU/Disney+ shows, we know what to expect from a season finale. Taking a cue from the movies, the TV spinoffs typically switch gears from emotional storytelling to deliver an action-heavy conclusion, often involving an explosive CGI light show. In the case of Moon Knight, this translates to the Egyptian gods Khonshu and Ammit duking it out while Marc, Steven and Layla take down Arthur Harrow. Like the finales for WandaVision, Loki and others, it’s a letdown compared to what came before.

Now armed with Ammit’s powers, Harrow is allegedly powerful enough to kill millions of people, but thanks to lacklustre character development, he still isn’t a very menacing figure. The most compelling element of the show is still the interplay between Marc and Steven, which is part of why the finale is slightly anticlimactic. The MCU formula dictates that Moon Knight and Harrow’s final battle must take precedence. But the real conclusion here is Marc and Steven making peace with each other, teaming up to negotiate with Khonshu and free themselves from Moon Knight’s duties. Unfortunately, this only gets a few minutes of screentime.

Hollywood has decided 20-minute action sequences are the only way to conclude a superhero blockbuster, and while those action sequences aren’t always good, they at least feel structurally appropriate in a two-hour movie. This trope lands differently in miniseries format. Instead of experiencing the big hero/villain showdown as the conclusion of a single story, Disney+ splits it off into a separate episode, destroying any sense of buildup.

As someone who is already weary of the MCU’s formulaic storytelling, I was already primed to find Moon Knight‘s finale uninspiring. But even among those who wholeheartedly love the show, I don’t think this type of finale is actually working on Disney+.

When you look at fan reactions on social media, people are mostly excited about Marc and Steven’s emotional arc, and (to a lesser extent) comic book callbacks. Pretty much everyone agrees that Oscar Isaac’s performance is the best part of the show. Defeating Arthur Harrow is an afterthought compared to Marc and Steven getting some closure, and it’s truly baffling that the MCU machine fails to realize this. After all, the entire franchise is based around hiring hot, famous people to play charismatic heroes. Why not just let that be the focus of the show?

There’s no better illustration of this than Moon Knight‘s post-credits scene, which delivers the belated debut of Marc and Steven’s violent, amoral alter-ego Jake Lockley. In a nod to his comic book role as a cab driver, Jake arrives as a chauffeur, kidnapping Arthur Harrow from the hospital and throwing him into a limo. Shortly before Jake shoots him in the head, there’s a two-second shot where he kicks over Arthur’s wheelchair. This brief, characterful moment of petty violence has more personality than 90% of the episode’s other scenes. In the future, we could really do with more of that kind of thing, and less of the repetitive CGI light show.