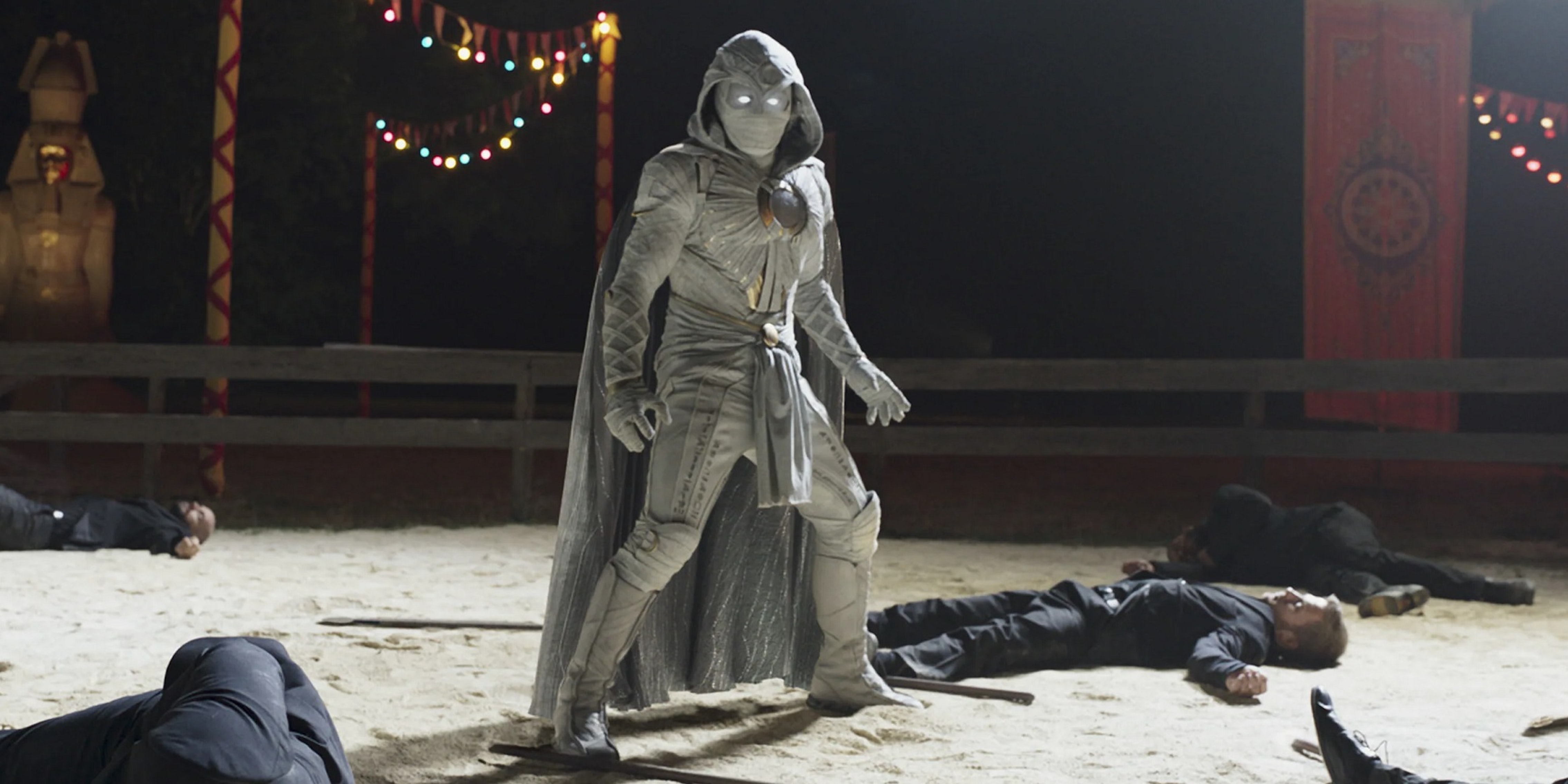 This action-heavy episode is closer to Moon Knight fans' expectations from the comics—and sows the seeds for an intriguing mystery.

Moon Knight‘s third episode is more conventional than the first two: An action thriller starring mercenary Marc Spector. This brings the show closer to what many comics fans expected in the first place, but it also loses some of the quirky charm that came with Steven Grant’s fish-out-of-water role.

Moving the main cast to Egypt, we see Arthur Harrow hunting for a secret tomb while Marc fights people across the roofs of Cairo. Soon after, both men end up on trial before a panel of ancient Egyptian gods, confirming to the audience that Marc’s supernatural boss Khonshu is kind of a freak. While the other gods’ human avatars seem relatively well-adjusted, Marc and Arthur (the current and former Khonshu avatars) are transparently messed-up—something Arthur uses to make an argument that Khonshu is “abusive” and should be thrown in God Jail.

Marc and Khonshu argue for a reprieve, but it’s contingent on Khonshu remaining a passive bystander to mortal conflicts. By the end of the episode, he’s already broken this law by performing a kind of time-travel spell on the night sky, turning back the clock in order to use an ancient star map. As predicted, he ends up in the slammer—which is bad news for Marc and Moon Knight’s superpowers.

We also get some more insight into Marc’s relationship with his estranged wife Layla, teaming up to meet with antiquities collector Anton Mogart (Gaspard Ulliel), aka Marvel’s Midnight Man. This is where Steven’s talents come into play because while he’s definitely not good in an emergency, he has Egyptian historical knowledge that Marc simply lacks. Steven can decode a map hidden in a sarcophagus belonging to Mogart—and when things get hairy with Mogart’s bodyguards, Marc can swiftly take over for the resulting action scene. The makings of a useful partnership!

But is it always Marc taking over? This episode flips the script on earlier action scenes, which involved a panicked Steven having no idea what Marc is doing with his body. Now we see Marc actually fighting onscreen—but he doesn’t have full control over their shared body either. At one point Marc “wakes up” to find several of his opponents stabbed to death—something he initially pins on Steven, an implausible theory because Steven is a wimp. So who was it? A lot of Marvel comics fans are guessing Jake Lockley:

In the comics, Jake Lockley is the third of Moon Knight’s alternate personalities—a cab driver who does the boots-on-the-ground investigating for urban crime storylines. This blue-collar role contrasts with Steven Grant (who in the comics is a suave, Bruce Wayne-style business tycoon) and Marc Spector’s mercenary action hero persona.

However, the MCU’s Moon Knight has already made some drastic changes to comics lore, beginning with Oscar Isaac’s dorky English reimagining of Steven Grant, and continuing with last week’s usage of the “Mr. Knight” costume. So while Marc and Steven are clearly sharing a body with a mysterious third persona… we have no way of knowing if it’s Jake Lockley. And if it is Jake, then it could be a very different version from what fans expect.

All we know is that this third alter-ego stabbed a bunch of guys to death. This could mean he’s a cab driver with knife-fighting skills and a ruthless drive for survival—or it could signal something much darker. The show is already sowing seeds of psychological horror around Moon Knight’s multiple personalities, and it’s entirely possible that this new guy is an outright villain. A bloodthirsty killer who shares a body with Marc and Steven, but isn’t necessarily their ally.