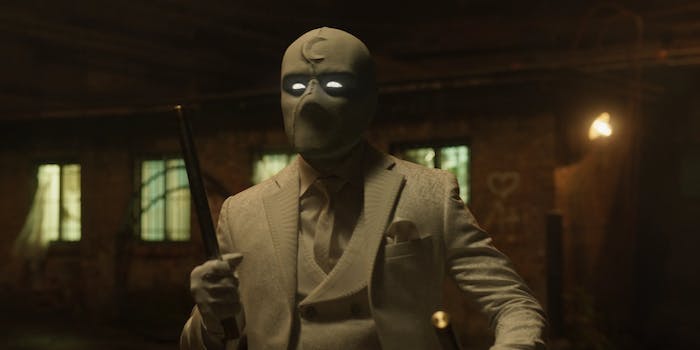 This post includes spoilers for episode 2 of Moon Knight.

So far, Disney’s Moon Knight involves surprisingly little Moon Knight content. Oscar Isaac’s Steven Grant is essentially a brand new character; an awkward Englishman who flails and panics his way through the first two episodes. It’s a far cry from the comics, which skew toward violence and psychological drama, starring Moon Knight’s main alter-ego Marc Spector. In this adaptation, Marc is more of a side character—and episode 2 introduces another bold twist on a beloved Moon Knight alter.

There’s already some speculation among naysayers that Moon Knight’s quirky, comedic tone is Disney’s way of avoiding the character’s dark side. However, I’m inclined to think it’s more about avoiding repetition. The MCU already includes plenty of tough action heroes, and Steven feels fresh by comparison.

After a chaotic series of confrontations between Steven, Marc, Khonshu, Arthur Harrow, and Layla (Marc’s estranged wife), episode 2 delivers what fans were expecting from the start: A big Moon Knight action sequence. But even this isn’t quite what you’d expect. Faced with attacks from Harrow’s followers and a supernatural monster, Layla yells at Steven to “summon the suit.” But while Layla and Marc have years of experience with Moon Knight’s costume and superpowers, Steven has no idea what she’s talking about.

When Steven does manage to summon the suit, it’s shaped by his own expectations. The result is a literal three-piece suit and matching mask in Moon Knight’s all-white color scheme—a very different vibe to the Fist of Khonshu costume, which involves a cape and hood, referencing the bandages of an Egyptian mummy. When Marc wears this costume, he’s filmed to look taller than Oscar Isaac’s real-life height, bulked up by extensive padding. Steven’s suit is far less impressive.

In the comics, that snazzy three-piece number is associated with the “Mr. Knight” persona, a detective introduced by writer Warren Ellis and artist Declan Shalvey in 2014. The show repurposes it for Steven Grant, with no suggestion of a new alter-ego.

Depending on your attachment to the comics, this is either a fun little twist or frustratingly disrespectful toward Moon Knight’s gritty origins. Either way, it fits the MCU’s brand of self-referential humor. The franchise constantly displays a self-conscious attitude toward its own source material, poking fun at silly details like Dr. Strange’s name. Even in the MCU’s new era of fantastical storytelling, the movies tend to scale back the weirdness, opting for a tongue-in-cheek vibe and conservative aesthetic choices.

For better or worse, that’s what seems to be happening with Moon Knight. Steven is sincerely vulnerable, but he’s also a figure of fun. The show never takes Moon Knight entirely seriously as a concept, as evidenced by Khonshu’s role. Khonshu certainly looks impactful—an eight-foot Egyptian deity with a bird skull for a head—but while he’s terrifying to Steven, he’s less impressive to the audience. His booming voice is often played for laughs, acting as a combination of jump-scare and punchline as Steven reacts to a creature only he can hear.

As someone who doesn’t really care about the Moon Knight comics, these changes are no skin off my back. The show is fun! But as a broader trend across the MCU, it’s frustrating to see yet another weird, eerie comic be downplayed as a joke. Moon Knight and Khonshu both have the potential to be deeply unsettling, but even with horror directors Justin Benson and Aaron Moorhead at the helm this week, a truly creepy atmosphere just isn’t on the cards for the MCU.