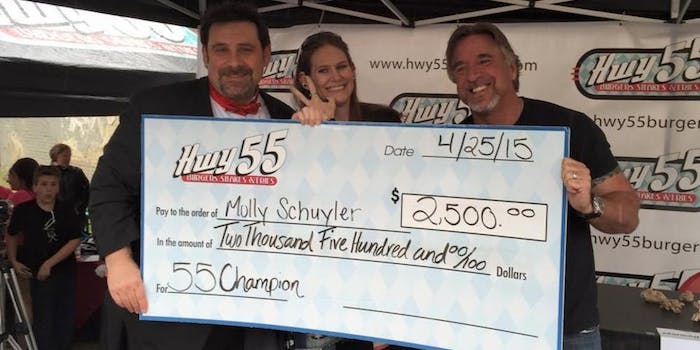 Molly Schuyler eats a 55-oz burger in under 3 minutes, is a true inspiration

All hail the Burger Queen.

All hail the Burger Queen.

Molly Schuyler continues to sweep at eating competitions, this past weekend devouring a 55-ounce burger (and a side of fries) in a mere two minutes and 12 seconds. She broke the previous record of 3:27.

Dubbed the 55 Challenge, Schuyler was up against three-time champion “Gentleman” Joe Menchetti who won the inaugural 55 Challenge in 2008.

Watch her jaw-dropping performance and feat of true culinary athleticism:

Earlier this month, Schuyler owned her competitors at eating a 72-ounce steak meal. The 120-pound mother of four has been making a name for herself in the world of competitive eating, taking title after title and shattering records in the process.

Schuyler, you truly are an inspiration. And look how happy she looks with her winning check:

Our 55 Challenge record-setter! RT @MollySchuyler thanks for an amazing day!! Your burgers are beyond epic!! pic.twitter.com/Gl6V4tHi2f

We can’t wait to see what she eats next.