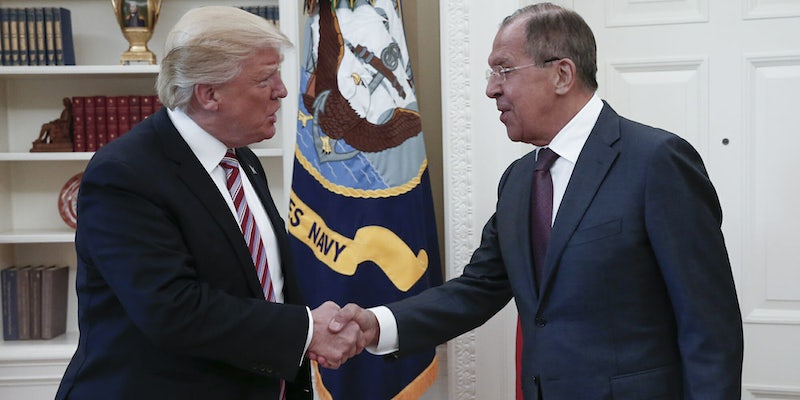 The information is said to have had the highest level of classification.

During Trump’s meeting with Russian Foreign Minister Sergey Lavrov and Ambassador Sergey Kislyak on May 10—the day after Trump abruptly fired former FBI Director James Comey—the president reportedly shared secret information pertaining to the Islamic State that he was not cleared to share, according to multiple unnamed sources who spoke to the Post.

The information, which was reportedly under the highest level of classification, was shared with the U.S. from a partner under an agreement that remains tightly guarded within the U.S. government. The information reportedly pertained to the operations of the so-called Islamic State. One official told the Post that Trump “revealed more information to the Russian ambassador than we have shared with our own allies.”

The Post reports that Trump’s divulsion to the Russian officials included “the city in the Islamic State’s territory where the U.S. intelligence partner detected the threat.”

Due to the sensitive nature of the intelligence, the Post also said it was “withholding most plot details, including the name of the city, at the urging of officials who warned that revealing them would jeopardize important intelligence capabilities.”

While a source told the Post that Trump’s actions were “kind of shocking” and “very reckless,” it is unlikely Trump broke the law due to the broad powers of the president to share classified information.

Regardless of the legality, the nature of the situation will increase scrutiny of Trump, who remains under fire for firing Comey amid the FBI’s ongoing investigation into Russia’s attempts to influence the 2016 presidential election, which includes probes into the Trump campaign’s ties to Russian officials.

Comey, when announcing the FBI’s findings in its investigation into Clinton’s use of email in July 2016, called her and her staff “extremely careless” in their handling of classified government information.