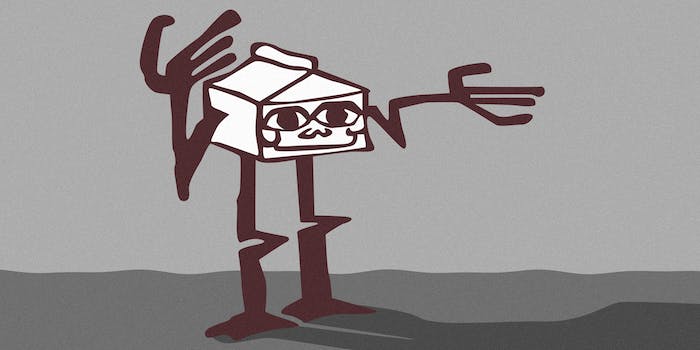 Rise of the Milkwalker: The internet is obsessed with this weird, old dairy mascot

It'll walk right into your heart.

There comes a point in every company’s life when it’s time to create a cartoon character to appeal to kids. Some of these characters are well-thought-out, with fully developed backstories. Others are thin, sad, and slapdash. But some fortunate characters are given life by their fans—characters like the Milkwalker.

Milkwalker asks: do you know who you are?
do you know what city you live in?
why can't you recall that?
why? pic.twitter.com/m1fUqXCjbc

The Milkwalker appeared on the boxes of Northwest dairy company Darigold during the 1980s, offering helpful safety tips to kids while they wolfed down their school lunches. It’s a sentient milk carton that has grown arms and the legs of an Imperial AT-ST walker from Star Wars. Is it mechanical or organic? Is it full of milk? What does it want with us?

The search for answers apparently began with this Tumblr post, which turned the character into a meme.

“It’s definitely an offshoot of the creepy pasta community, as [the original poster] had a Slenderman series that was big among the the horror community,” Tumblr told the Daily Dot via email.

Creepypasta is the online version of campfire horror tales, full of original monsters with elaborate histories and origin myths. Slender Man is perhaps the best known of these.

According to Tumblr, on the day heck-yeah-old-tech posted about Milkwalker, engagement (searches, original posts, reblogs, and likes) around #creepypasta increased 140 percent.

Very quickly, the Milkwalker joined the ranks of online-first horror characters. Fans transformed it from an innocent cartoon character into a sinister cryptid. It isn’t just telling kids to learn their addresses in case of an emergency—it’s questioning all of us about who we really are. It’s like something out of the surreal and creepy podcast Welcome to Night Vale.

Since that post in late November, the Milkwalker’s backstory has developed through a series of tweets and Tumblr posts. Everyone has their own ideas about where it came from and what it wants—their own “headcanon,” in fandom parlance. In typical Tumblr fashion, some find it scary, while others find its message of caring appealing and wish it were their dad.

milkwalker walked into our lives when we needed her most. and now that she's here we have the audacity to question her judgement?

Oh, and there’s fan art. So much fan art:

a unique milkwalker background for your phone, compliments of me pic.twitter.com/lJFjQdoF2t

Darigold told the Daily Dot on Dec. 27 that “a packaging company used the Milkwalker character in a safety campaign on Darigold milk cartons,” and that it probably happened in the 1980s. The designer remains unknown.

Later, Darigold tweeted out a photo of what the Milkwalker looks like today:

We appreciate the enthusiasm of the fans! Milkwalker was used in a safety campaign on Darigold milk cartons. Designer is unknown. pic.twitter.com/CjYEB1S1j9

Does this mean the company could revive the character? It’s too early to say, but fans would certainly love it.

The potential is strong for Milkwalker T-shirts and action figures, or maybe even the most-demanded Milkwalker product of all: a video game.

i'd play a milkwalker video game

We should all be glad that this big weirdo has suddenly walked back into our lives.