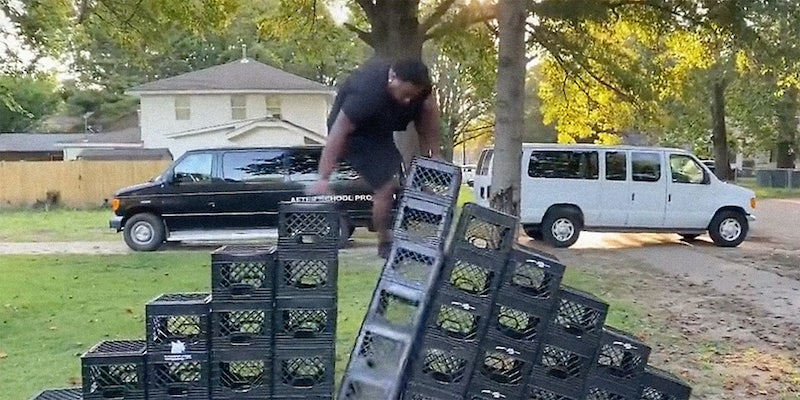 The internet is falling for the milk crate challenge

Don't break your back doing the milk crate challenge.

It’s been a minute since we’ve had a legit, multi-platform-encompassing challenge. Now there’s the #milkcratechallenge.

The premise of the milk crate challenge is that someone must walk up and down a pyramid-shaped stack of crates without falling. There is documentation of people joyfully completing the challenge, as well as showing off other skills while doing it—like rolling a blunt or walking it in heels.

But the majority of participants are not sticking the landing, which is part of the draw. And, of course, many people are getting injured. A crate challenge in Shreveport, Louisiana was reportedly interrupted over the weekend after a shooting left three people dead.

The origin of the milk crate challenge

The trend appears to have started on Facebook in mid-August, but it quickly spread to TikTok, Twitter, and Instagram. The #milkcratechallenge tag has more than 1.5 million views on TikTok, and #cratechallenge has more than 27 million views. Know Your Meme points out that this trend isn’t brand new: There’s a 2011 video in which a man tries to run across milk crates and falls.

Because many of the videos are from the Black community, people had thoughts on the intent of the milk crate challenge.

Even Cardi B weighed in on the memes.

All this is to say: Please exercise extreme caution if you attempt the challenge. Maybe start small.