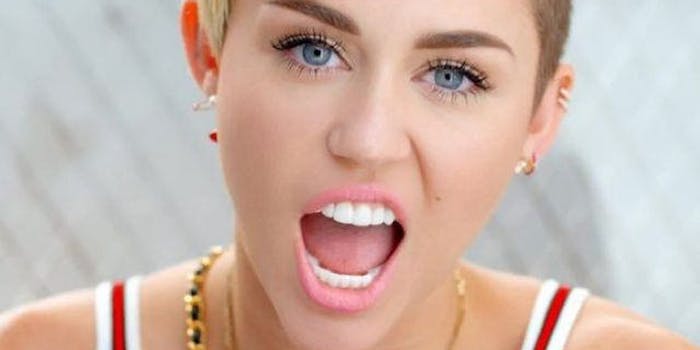 Before Miley Cyrus ditched the hair extensions and the glamorous life of being TV’s Hannah Montana, she was rocking pencil-thin eyebrows and flowing brunette locks across several photoshoots.

She also stared into the camera with weird, dead eyes that people are having too much fun with, years after the fact. A new meme that’s been going around is pretty simple: It’s a photo of Miley with piercing blue eyes that seem to have zero signs of life behind them. Kind of like a doll’s eyes. She’s looking straight ahead as though she’s lost any sort of semblance of humanity. And people are having a blast with this strange pose, because why not?

There’s no real explanation for why the picture is making the rounds right now, but we know it’s a relic from the singer and actress’ storied history. When the photo was taken, Cyrus was actually 15, and looking a sight different from the somewhat erratic pop star we now know her as, even post-Bangerz (her best album, don’t @ us.) But…that face. Why?

It’s uncanny, how terrifying this look for Miley actually is. You okay, Ms. Cyrus?

Most people opt to focus on how unsettling Miley’s stare is here, like she’s some kind of automaton.

Miley’s face is even being combined with other memes, like in the case of this exemplary A Star is Born tweet.

As creepy as the photo is, people just can’t get enough of it.

Others are simply scared for their lives.

When I see that Miley Cyrus eyes meme flash up on my tl pic.twitter.com/tWxtk5zVDn

It’s arresting, in more ways than one. We’re just curious, in the meantime, how Miley feels about this bizarre lewk of hers from so long ago.

Unfortunately, she’s still taking her sabbatical from social media at the moment, so it’s possible she hasn’t even seen the hilarity going on with these images. When she decides to return, however, it looks like she’ll be in for a hilarious time with all these edits.