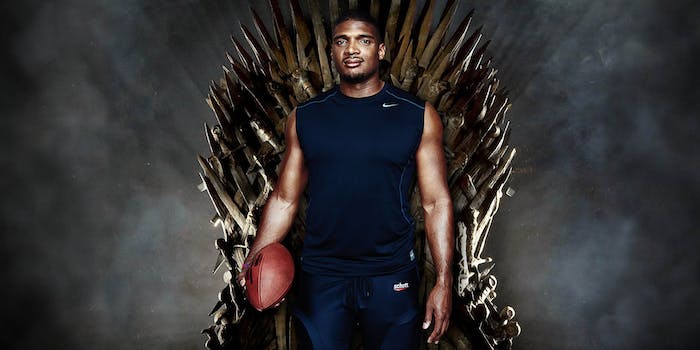 It would've been a wedding to remember.

As the first openly gay football player to be drafted into the NFL, Michael Sam is now used to being accosted by paparazzi. But in a recent encounter with TMZ, he managed to best a cameraman in a hilarious, Tyrion Lannister–esque game of wits.

When Sam and his new fiancé, Vito Cammisano, ran into the unnamed cameraman outside of Los Angeles International Airport, the man started grilling Sam about their engagement and future wedding plans. It’s the typical TMZ routine for on-camera run-ins with celebrities.

But instead of ignoring the man, Sam had some fun with it. He told the paparazzi he was getting married in Westeros.

Actually getting married in George R.R. Martin’s fantasy land would be a very bad, no good idea—not to mention expensive—but Sam’s Game of Thrones reference was a creative way to just shake the guy off (and show the world that he’s a fan). But what makes this encounter worth its weight in Lannister gold is that the cameraman has no idea what Westeros is, so he’s taking Sam at face value—he might actually believe that Sam and Cammisano are getting married in Game of Thrones’ fictional universe.

“Is this in Greece? It sounds like a Greek—” the cameraman says at one point, and Sam and Cammisano can barely keep it together.

TMZ, to its credit, went along and published the video anyway at the expense of its photographer (whom the site called Hodor) with the description “Michael Sam just dominated a TMZ photog at LAX like he was the Mountain … and we were Oberyn Martell … and it’s pretty damn hilarious.”

If anything, he pulled a Tyrion Lannister or a Littlefinger and used something even more powerful—his words—to pull one over on the cameraman. It’s not as impressive as smashing a dude’s skull with your thumbs, sending him to the Wall, or hiring an assassin like Jaqen H’ghar to take care of it… but for today, it’s good enough.