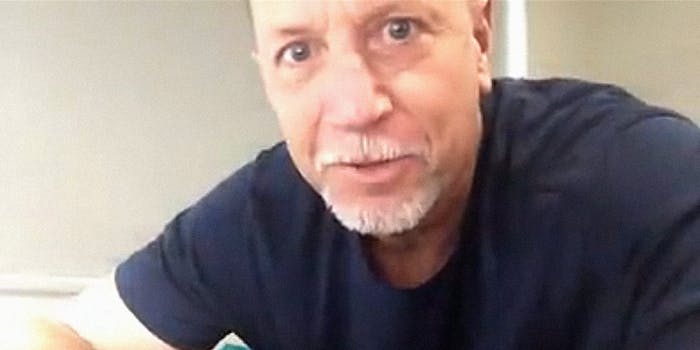 Here's why the alleged leaker posted it.

A video of Miami Dolphins offensive line coach Chris Foerster appearing to snort a white powdery substance was leaked on Facebook Sunday night. Though it’s unclear when the video was taken, the team said it’s aware of the footage and is investigating.

In the video, Foerster says, “Hey babe, miss you, thinking about you. How about me going to a meeting and doing this before I go?” Then, he proceeded to snort the first of three lines on his desk.

This is the video supposedly of Dolphins offensive line coach Chris Foerster snorting coke before a meeting pic.twitter.com/L7ZsdZMH7U

According to the Miami Herald, the video was shot in the Dolphins offices. A team spokesperson said Sunday night, “We were just made aware of the video and will have no comment at this time.”

According to reports, a woman named Kijuana Nige apparently posted the video to Facebook (though the post and her account are now deleted). She wrote in another since-deleted post, “The white people mad at me like I forced blow down this mans nose and like I recorded it on tha low. No those are his habits and he recorded himself and sent it to me professing his love. So quick to make excuses for him but will roast a minority player over an athem, dog fights, weed, domestic issues etc. But y’all keep saying ALL LIVES MATTER STFU‼️”

The 55-year-old Foerster is a 25-year NFL coaching veteran, and according to ESPN, he’s one of the highest paid assistant coaches in the league, drawing a salary between $2.5 and $3 million per year.

Nige also implied she had more videos she could make public, writing in that now deleted post, via Heavy.com, “They better leave ppl like Colin Kaepernick alone before I pick off more of’em you know this shit easy 4 me.”

Update 9:14am CT, Oct. 9: In a statement, the Miami Dolphins announced that Foerster has resigned.

“We were made aware of the video late last night and have no tolerance for this behavior. After speaking with Chris this morning, he accepted full responsibility and we accepted his resignation effective immediately. Although Chris is no longer with the organization, we will work with him to get the help he needs during this time.”