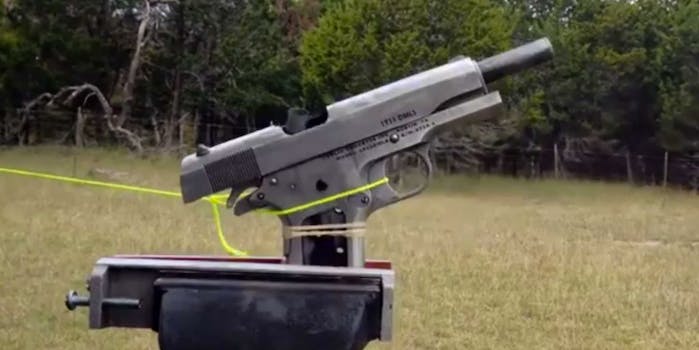 It's not meant for mass production, but it proves the concept.

Nearly six months to the day after the first 3-D-printed gun was successfully fired, this game changing means of weapons manufacturing has made its next great technological leap forward.

This week 3-D printing engineers from Solid Concepts in Austin, Texas, unveiled the first 3-D printable gun made out of metal—making it stronger, more reliable and more durable than its plastic forerunners. But unlike previous designs, the team behind this gun say it’s not intended for the masses.

That’s a good thing for gun control advocates, since this new weapon is potentially far more dangerous than the first 3-D printable gun, the Liberator (developed by another Austin-based firm, Defense Distributed). This new gun, based off a 1911 pistol design, has already been fired more than 50 times without damage. Plastic 3-D printable guns have fired successfully in the past, but do not hold up well against the stresses of repeat firings.

That’s why the Solid Concepts team wanted to make a firearm with more advanced 3-D printing technique known as direct metal laser sintering (DMLS), to prove the viability of the technology.

“When we decided to go ahead and make this gun, we weren’t trying to figure out a cheaper, easier, better way to make a gun,” said Solid Concepts’ DMLS Manager Phillip Conner in a video demonstrating the weapon. “That wasn’t the point at all. What we were trying to do was dispel the commonly held notion that DMLS parts are not strong enough or accurate enough for real world applications.”

Unlike Defense Distributed’s Cody Wilson, who put his plastic gun’s CAD design online for others to download and produce themselves as part of a philosophical end-run around government firearm regulations, Solid Concepts seeks to work within the confines of the laws. Kent Firestone, the firm’s vice president of additive manufacturing, claimed his firm is the only 3-D gun manufacturer to hold a federal firearms license.

“(W)e’re doing this legally,” Firestone said in a written statement. “In fact, as far as we know, we’re the only 3-D printing service provider with a federal firearms license. Now, if a qualifying customer needs a unique gun part in five days, we can deliver.”

The gun itself is based on an older design that’s already in the public domain. It’s composed of 33 stainless steel and inconel parts along with nylon hand grips. As where every component of the Liberator could be made with a 3-D printer except for the metal firing pin, every last one of this metal gun’s components where made in a 3-D printer.

This latest breakthrough in the 3-D printable arms race is likely to only further stoke the concerns of those who fear what this new technology means for society. But the designers insist their DMLS technique is still out of the reach of common users.

“There are barriers to entry that will keep the public away from this technology for years,” company spokesman Scott McGowan told The Verge.

Those barriers include prohibitively high cost in obtaining the equipment and the skill necessary to use it. Solid Concepts was not immediately available to return the Daily Dot’s request for comment about why a gun was chosen as the machine for demonstrating DMLS’s viability in the first place, however.

Since the Liberator’s debut back in May, developers around the world have been pushing this new technology further and further. Numerous designs similar to the Liberator have been developed by other designers. Others have created 3-D printable bullets and rifles.

This surge in homemade, digitally delivered firearms has lawmakers at the local, state and federal levels scrambling to close the legal loopholes 3-D printable weapons exploit. Bans and regulations have already be introduced in state legislatures in New York and California. New York City has taken up the cause. And members of congress were pushing for regulations before the first such gun was even fired.