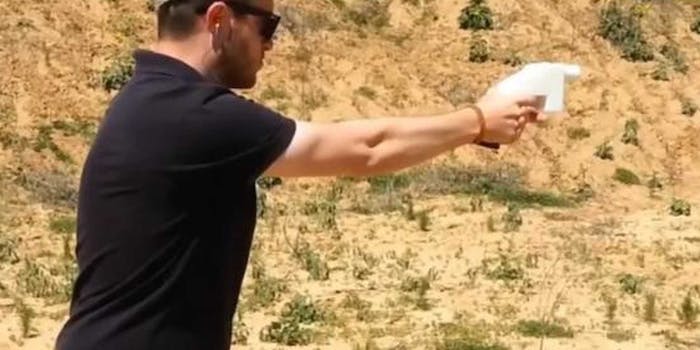 Critics said it couldn't be done, but here's video of an all-plastic gun successfully firing.

In the hands of its 25-year-old creator, Texas University law student Cody Wilson, the gun looks like an absurdly large Lego piece. Called the Liberator, it is very real, very deadly, and very important: It is the first gun printed entirely with 3-D-printed parts (except for a single common nail that can be bought at any hardware store) and it is not hyperbole to call its firing a historical event. You’re going to be reading about it for years to come.

On Sunday, Wilson and the rest of his team at nonprofit Defense Distributed showed off the gun to Forbes‘ Andy Greenberg, firing it by yanking a string attached to the trigger. Later that day, the group released a second video, this time showing Wilson, donning a baseball cap and sunglasses, firing the weapon at a dusty gun range near Austin, Texas.

The group had previously focused on building components of large guns, and in particular the lower receiver of an AR-15 rifle. Critics have claimed it would be impossible to build a fully functioning gun, that there was no way plastic could withstand the heat and pressure of exploding gunpowder. This video should silence those voices and stand as a testament to the Defense Distributed technological prowess. Greenberg testifies to the gun’s structural soundness after firing:

Wilson crouches over the gun and pulls out the barrel, which was printed over the course of four hours earlier the same morning. Despite the explosion that just occurred inside of it, both the barrel and the body of the gun seem entirely unscathed.

Wilson named the gun the “Liberator” in homage to disposable handguns dropped over occupied France in World War II by the allies.

Defense Distributed’s success has not gone unnoticed. Lawmakers in Congress, including New York’s Steve Israel, and Senator Chuck Schumer are pushing a ban on 3-D-printed handguns. “A terrorist, someone who’s mentally ill, a spousal abuser, a felon can essentially open a gun factory in their garage,” Schumer said in a press conference.

Update: As promised, Defense Distributed made the CAD files for the Liberator available for download on DEFCAD Monday morning.