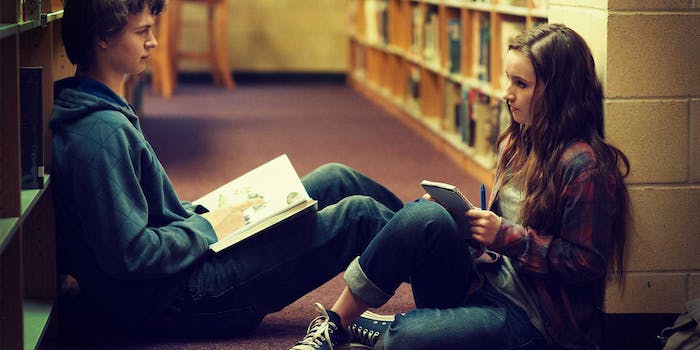 (Note: the following will spoil some important scenes in the film Men, Women & Children, currently in wide-ish release. If you intend to see it, proceed at your own risk.)

Jason Reitman has had a rough 2014. In January, the acclaimed filmmaker’s delayed adaptation of Joyce Maynard’s Labor Day hit theaters in the immediate wake of its ill-fated Oscar run and for the most part was met with indifference by audiences. Now, this weekend his latest film, Men, Women & Children, entered into wider release, despite generally mixed-to-negative reviews and a general lack of success in limited release to date.

Admittedly, the film isn’t an easy sell; on paper it’s an Altman-esque ensemble piece about the world’s many new issues with which it must contend in the era of the Internet: porn addiction, affair websites, gaming addiction, a general sense of isolation, and so forth. It vaguely recalls last year’s onerous Disconnect, another film predicated on the idea that technology is generally more bad than good and has made us unable to communicate, as illustrated by ham-handed metaphors. Men, Women & Children isn’t quite as tedious as that film but suffers from similar woes. In its alarmism, it ends up disconnecting itself from the Internet as it might be recognizable to its ostensible audience.

The film frames each character not so much as a character than as a jumping-off point for each of its many diatribes on what’s wrong with The World We Live In Today. And in this, it misses the point entirely. To engage with the Internet is to engage with a new, modernized extension of mass culture itself. Treating it as a distant, confusing new enemy of general human decency carries with it the side effect of the film often coming off like the most depressing riff imaginable on the scene in Zoolander when Ben Stiller and Owen Wilson aggressively paw at a computer, hoping to unearth its many secrets.

Children takes a detached perspective to humanity that seems at odds with its thesis about the ways in which humans need to find their way back to one another. The film’s framing device is built from Carl Sagan’s observations on the “Pale Blue Dot,” or Earth as seen from millions of miles away during the Voyager 1’s expedition into the recesses of space. All of this is accompanied by Emma Thompson’s narration, which helps to frame the whole of the film as a perspective on modern humankind as viewed by aliens.

There’s absolutely room in the current cinematic landscape for a film to make insightful points about the distance of the Internet, in particular the ways in which people neglect to understand that interaction online is still taking place with other human beings. This is best evidenced in a haunting (if off-character) sequence late in the film when Ansel Elgort’s withdrawn high schooler is driven to attempt suicide by Jennifer Garner’s paranoid mom, who poses as her daughter on a private Tumblr page in order to keep strange online boys away from her child. It’s the only time in the film when the true gravity of a life lived under various guises of anonymity actually comes through and, perhaps most importantly, the real-life consequences of things done online.

But too often, the film carries itself as being about something newer and more radical than the melodramas it addresses, and as a result fails to find the emotional core in any of them. The film mistakes digital anonymity for a new phenomenon, when its stories of suburban angst and infidelity and the many pitfalls of teenhood are universal and nowhere near as alien as the film speculates. And instead of engaging with its characters in any meaningful way, it allows them to flail like mice in a maze through the film’s many topical beats. It isolates them from the viewing audience in the same way that the Internet supposedly isolates them from one another.

It’s fair to acknowledge that the film using deliberately off-brand websites would likely have proven distracting, but it doesn’t quite cover for the hypocrisy on hand. By branding its targets, the film only feeds into the very things it exists to condemn. Furthermore, there was a Whisper campaign for the film leading up to its release which encouraged audiences to share secrets about the people they know, anonymously. It’s perfectly copasetic for the film to condemn the evils of the Internet, then, at least until it comes time to recoup its budget.

Garner’s character in the film seems to exist for the sole purpose of highlighting that overprotection is no better a solution to the infinite riddle of the series of tubes than anything else, and yet it’s her perspective with which the film seems to empathize. She’s an extreme, to be sure, but her belief that evil lurks around every corner is one that Reitman corroborates more often than the film warrants, or needs. Men, Women & Children is at odds with itself, a film that plays into the same harmful ideals it wants to comment upon and encourage viewers to move beyond.

It says a lot about the way we live now, but so disingenuously that after a time it’s hard not to give yourself over to the unintentional hilarity of Adam Sandler ordering an escort and laugh your way through.

Photo via Men, Women and Children/Trailer