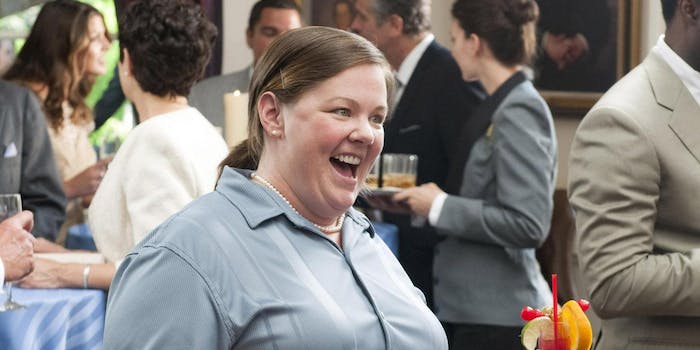 I offended Melissa McCarthy so you don’t have to

If you write on the Internet long enough, eventually you’re going to end up feeling like an a-hole about something.

If you write on the Internet long enough, eventually you’re going to end up feeling like an asshole about something.

Yesterday morning, I woke up like most days: I got up, sorted through my morning emails (which included more James Franco-related death threats than usual), and poured myself a cup of coffee while I made sense of the day’s torrent of headlines. But one in particular stuck out to me—from a story written by Jezebel’s Callie Beusman: “Don’t call Melissa McCarthy America’s plus-size sweetheart.”

The article was about the Mike and Molly actress’ recent People magazine interview, where she opened up about her career and struggles with body acceptance during her 20s, but the headline stuck out to be for reasons I couldn’t place. As I read on, my mouth fell open in horror:

Anyway, having risen to astronomical success since then (she’s on billboards literally everywhere these days!), McCarthy says she’s still not impervious to shitty little comments. One thing she pointed to as particularly irritating was a recent reference to her in an article as ‘America’s plus-size sweetheart’—something that, obviously, would never be said about an extremely famous dude. ‘It’s like I’m managing to achieve all this success in spite of my affliction,’ she said. ‘Would you ever put that in the headline for a male star?’

Now, it wasn’t just that anyone had said that in an article—I had said that in an article last year. While working as a pop culture correspondent (read: blogger) for Chicago’s NPR affiliate, I wrote an essay taking New York Observer critic Rex Reed to task for calling McCarthy a “hippo” in a review of her 2013 film, Identity Thief, asking Reed to “chew off whatever nub of respectability he still has left and go slowly bleed his career away in a field somewhere.”

It’s an essay I now regret writing—not for being rude to one of America’s longest-running irrelevant film critics but for completely missing the point of body positivity by being incredibly patronizing toward my subject. While I spent a great deal of the essay praising McCarthy for making her Identity Thief character, Diana, into more than a stereotype (imbuing what could have been a punchline with genuine pathos), I reinforce the idea that she’ll never be more than “the plus-size actress” right in the fucking sub-header. If ever there were a time for a writer face-palm, this would be it.

In the People interview, McCarthy doesn’t mention me by name, and as friends reassured me, it’s pretty likely a) she never read my article in particular and b) hasn’t the slightest clue who the fuck I am.

I’m not such an egomaniac that I assume every use of a phrase has to do with me—but it doesn’t let me off the hook and makes it more important for me to take personal responsibility in the matter. She didn’t call me out, but I still used the damn phrase, so it’s my job to call myself out. For instance, should you call your friend a “scum-sucking road whore” behind her back, just because she wasn’t there to hear it doesn’t mean you didn’t say it. If an idiot falls in the woods, trust me, he still makes a sound—a stupid, stupid sound for which he is now very sorry.

For those who don’t understand why this is an issue, let me begin with a thought exercise. Imagine you are a woman (and 51 percent of you don’t have to). Then imagine you have been fortunate enough to receive your MBA, working your ass off doing whatever it is that Business majors do. (I went to a Liberal Arts college, so I have no idea.) Then imagine you get a great job at a company, working twice as hard than all the male colleagues around you for years, enduring a culture of systemic sexism to be—voila!—promoted to CEO. (I assume this is a thing that people can be promoted to, but if not, go with it.)

And then imagine that after years of getting very little sleep and always being the last one to go home and overall proving your non-gendered worth, you’re constantly referred to as a “female CEO.” You’re not just a CEO, you’re a woman CEO—just like all the lady doctors and women lawyers and female presidents, if we even had those. When explaining why this is silly to people, a writer friend of mine (who happens to be female) likes to have people call them a “bitch doctor” or a “bitch lawyer.” For instance: “Amelia Earhart was the first bitch pilot to ever fly across the ocean.” That usually gets the point across.

Instead of celebrating these women’s accomplishments for achieving success in traditionally male-dominated fields, it has the effect of placing an asterisk next to their achievements. It’s basically saying, “You know, that degree-holding professional is good at using her lawyer tricks to keep me out of prison…for a girl.” Rather than critiquing women’s second-class status in the workplace, micro-aggressions like these sustain the idea of gender (or body size) as an affliction. It’s like being hobbled by systemic disprivilege and having someone point out that you’re hobbled rather than doing something about it.

Calling Melissa McCarthy “America’s plus-size sweetheart” isn’t quite breaking her legs. It’s a micro-aggression on the level of telling a woman you don’t know to “smile!” or whistling at her on the street or telling a woman she’s “too sensitive” or assuming that woman with a clipboard is a nurse. You’re not dumping pig’s blood on Wendy Davis or standing in front of Susan B. Anthony at the voting booth, but it’s still tacky and gross. You don’t need to be holding a bucket to be wrong.

Allyship can be difficult, and it’s a learning process that many of us fail at, even when we’re trying to be supportive. There’s a great example from the great Comedy Central show Broad City (which you should be watching), in which Ilana asks her best friend, “What’s better than a pink dick with a sense of humor? Besides a black dick.” Ilana is mistaking her sexual candidness for “getting it” (because, see, she said likes black dick!) when it looks like the opposite. Abbi responds, “Sometimes, you’re so anti-racist that you’re actually really racist.”

People interested in social justice often have a way of fetishizing the causes we think we’re supporting in a way that furthers the problem, whether objectifying black men’s or plus-size women’s bodies. That’s not to say that we should ignore a woman’s size altogether, because as writer Lisa C. Knisely reminds us “the fucking worst thing you can tell a fat girl is that she isn’t fat,” but pointing it out in a cutesy, wink-wink, oh-we-get-it way might serve to make people feel infantilized or emphasize being treated differently. We need to celebrate people’s bodies for the right reasons.

In the case of Melissa McCarthy, she’s one of the most successful and beloved actresses in Hollywood right now, one of the few A-lister who can actually open a movie. Four of her last five films have earned more than $100 million at the domestic box office and can generate excitement with such little support. Despite being critically trashed, Identity Thief was a box-office smash, and the upcoming Tammy has almost no ad campaign behind it but is projected to be her third $100 million earner in a year.

She’s done that not just by acting in the movies she’s been in—but transcending them and the roles she’s been given, proving she’s the butt of no one’s fat joke. In the process, the numbers show she’s not “America’s plus-size sweetheart.” By all accounts, she’s a total miracle worker.

But despite this, McCarthy will continue to struggle in an industry that won’t even dress her for the Oscars. She told Redbook: “Two Oscars ago, I couldn’t find anybody to do a dress for me. I asked five or six designers—very high-level ones who make lots of dresses for people—and they all said no.”

There’s no more literal example of a system that refuses to make room for women of all sizes and shapes, where—no matter how hard she’s worked or far she’s come—she’s always going to be in a different category than Jennifer Lawrence or Sandra Bullock, two A-listers often referred to as America’s sweethearts. Melissa McCarthy can’t have “normal success.” She has to have “plus-size success,” or as my writer friend might quip, “fat bitch success.”

A couple years ago, there was an Internet rumor floating around that Melissa McCarthy and Jon Hamm might star in a movie where she’s being “intensely courted” by Hamm and she repeatedly turns him down. That rumor turned out to be true: Bridesmaids director Paul Feig had written the scenario as a script called Dumb Jock, but both actors turned it down.

Why that might be was suggested by the recent 22 Jump Street, starring Channing Tatum and Jonah Hill. In the film, Hill ends up in an almost kiss-fight with Workaholics’ Jillian Bell, who steals the movie as Mercedes, a deadpan college student who repeatedly mocks Hill’s character for his age. Bell was previously featured on an episode of Curb Your Enthusiasm (“The Bare Midriff”) in which her character’s skimpy clothing was seen as inappropriate because Bell isn’t a size two.

Here, the idea of Bell kissing Jonah Hill is funny for the same reason—otherwise the scene wouldn’t be laughable. It would be sexy. In the same vein, Dumb Jock only works as a comedy if we can accept the idea of someone like Jon Hamm courting Melissa McCarthy as being inherently funny.

We should also ask ourselves how to be better allies to Melissa McCarthy, and the answer is to recognize her reality without fetishizing it. It doesn’t help anyone to completely erase the issue, but instead of patting ourselves on the head for tucking her under the chin, we should recognize her body and show up for her struggle by letting her define her experiences for herself. If we want to really celebrate McCarthy—instead of celebrating ourselves—we need to start just by listening. It’s what I should have done.