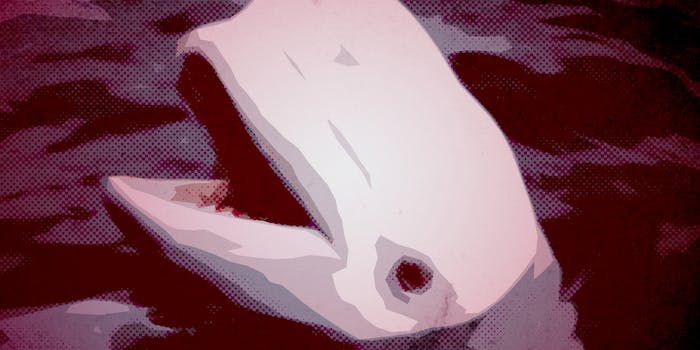 This beluga has some feelings.

Back in 2012, years before Donald Trump launched what he likes to call a presidential “campaign,” his wife had a simple question.

Melania Trump‘s inquiry was not, “Why the fuck am I married to this man?”—since that answer is pretty clear ($$$). Nor was it “why does my husband have tiny hands?”

Although the question was straightforward, it was full of complexities, of nuances. It was a query that would not be easily answered by a super PAC or speechwriter. She might have had more luck turning to Zoobooks or the hosts of PBS’s Zoboomafoo, but instead, Melania posed the question to her Twitter followers.

What is she thinking? pic.twitter.com/rFufrgMb

See what I mean by complex?

Now, before we answer “What is she thinking?” we must first answer the question who is she? That is, if she even is a she. How dare Melania gender this aquatic being?

But for the time being, let’s assume “she” indeed is a she. So, she’s actually this thing called a beluga whale. Also known as the white whale, it boasts the same skin color preferred by the GOP. And it lives in the Arctic, which is cold, just like Trump’s arguably nonexistent heart.

Anyway: Melania is wondering what this beluga whale is thinking.

Thankfully, the denizens of the internet had some ideas. The tweet has also gotten some more attention this past week, probably thanks to all the press Melania got after plagiarizing a 2008 Michelle Obama speech at the Republican National Convention. Who knew copying someone else’s assignment would get you some help on your bio homework!

These are all pretty good guesses. I’ll hand it to the internet: Good job, guys. But, you know, I have some other ideas as to what’s running through this beluga’s head.

Either way, pretty awful that this beluga whale is now getting caught in the crossfire of the Trump Circus. We wish this gentle lady the best.