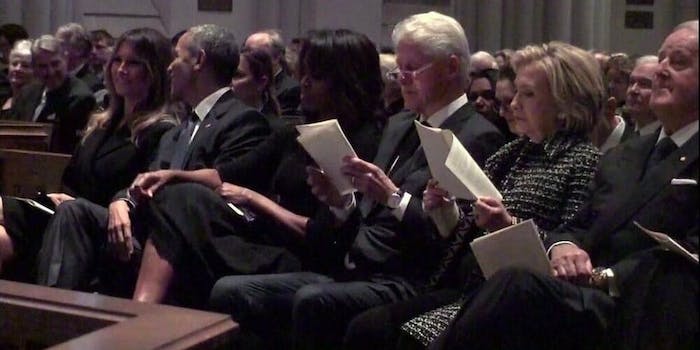 Melanie sat next to former President Barack Obama and shared the remainder of her row with Michelle Obama, Bill Clinton, and Hillary Clinton. Twitter users quickly seized on a photo of the first lady smiling and sharing a laugh with Obama, a rare sight when she’s in the presence of her own husband.

Yo! Did anyone else see the real smile of @FLOTUS ? hanging with @BarackObama . @realDonaldTrump WAS NEVER able to even do that lol smh still can't measure up #barbarabushfuneral pic.twitter.com/ZdG2lAgneV

I’m certain demented #dumpsterfire @potus would hate if we made this picture of a solo @FLOTUS glowing and looking happier than she’s never been next to the great @BarackObama at #BarbaraBushFuneral go viral. pic.twitter.com/ois8g67Mg1

Melania, usually stone-faced, is seen smiling for the first time in a while next to Barack Obama.

Donald is not going to like this picture. RT! #BarbaraBushFuneral pic.twitter.com/4XDbLhr2uO

Melania looks happier at a funeral than she has in ages. Wouldn’t you too if you went from being with Donald every day to sitting next to Barack?
#barbarabushfuneral pic.twitter.com/JrnLY0MJyX

Obama: So, How is the cyber bullying campaign going?#barbarabushfuneral pic.twitter.com/1gTubedzHE

For the first time in months, Melania feels comfortable around a real American President. Such a telling picture. #barbarabushfuneral pic.twitter.com/9ZkFN5dR7g