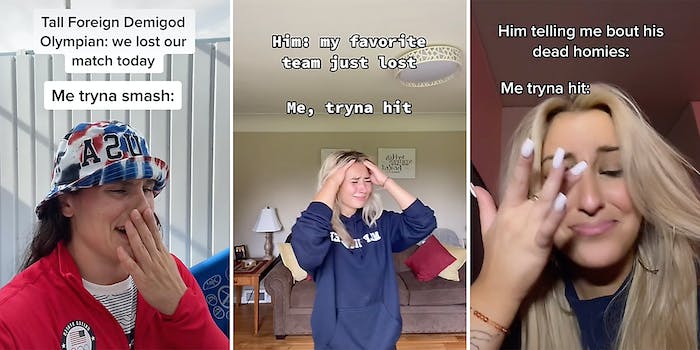 ‘Me tryna hit’ TikTok trend is the ultimate overreaction

And it comes with a familiar meme reaction video.

A new reaction trend is taking over TikTok to create a fitting encapsulation of our attempt to be sympathetic toward the things we might not actually care much about.

Like any good meme, Me Tryna Hit is an evolution of another meme. It takes the audio from a years-old video of Tyrese Gibson crying and pairs it off with how we might react to a partner’s or friend’s plight. It can also be used to showcase an exaggerated reaction to something minor.

It’s a classic punchline-reaction set-up: The first line tells us what we’re reacting to and the second reads “Me tryna hit” and shows a reaction of someone crying in an exaggerated manner. Sometimes, like the original iteration uploaded by @camkoldheart that uses both video and audio from Gibson’s original video and sets up the crying meme with “Me tryna hit,” it can get dark quickly.

Devin Sims, whose shortened edit of Gibson crying served as the audio cue for the “Me tryna hit” meme, also took a dark turn. But @thebalanciagabandit’s TikTok helped to transform the meme to reference more trivial fodder.

From there, the use of “Me tryna hit” varied as TikTokers depicted many, many ways that people tried to act sympathetic toward their partners and hookups. The more niche the subject, the funnier it became.

It also became a way to show how people fake being sympathetic over things that they totally were responsible for.

But it also became a way for some TikTokers to depict instances of white fragility whenever they’ve called out their white friends for racism or microaggressions.

We might never understand why exactly people have a strong reaction to certain things, but the attempt to fake sympathy when we don’t get it? That’s timeless.