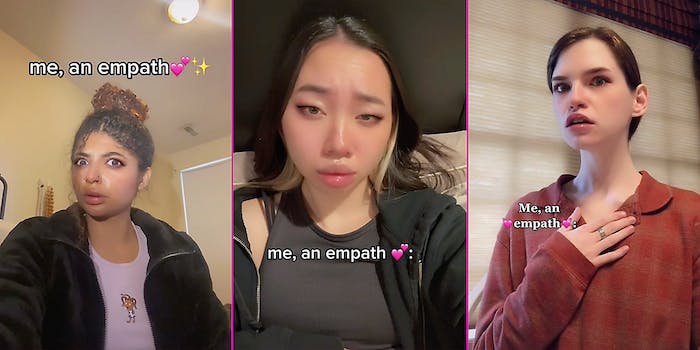 What is the ‘Me, an empath’ trend on TikTok?

'The internet has everybody trying to diagnose normal and healthy emotions.'

Can everyone on TikTok be an empath? A new meme is pointing out that something’s… off.

Empaths, according to a psychological definition, are those who are able to “feel” or share other people’s emotions, or are more sensitive to others’ feelings. The hashtag #empathsoftiktok has more than 164 million views, and one of the top videos suggests that empaths often come from dysfunctional or violent upbringings, where they learn to feel out certain situations or conversations to see if they’re “safe,” although that’s just a theory.

Of course, everyone wants to think they’re an empath. It seems like a positive thing, and makes people feel special. But not everyone is an empath. And on TikTok, where “trauma response” is a catch-all label and self-diagnoses are doled out with startling frequency, its definition has changed—and apparently been misunderstood.

In the “Me, an empath” meme, the empath comes off more like a sociopath, responding to serious situations or mischievous behavior with a lack of emotion. “U can’t call b0mb thr3ats into mcdonald’s bc they forgot ur sauce,” goes one popular TikTok from fr1endlyfriend0. The empath responds by staring discerningly. Several commenters stated they love being on “empath slander” TikTok.

Soha Khatib, who posts as fr1endlyfriend0, tells the Daily Dot she made the “Me, an empath” videos in response to a TikTok trend from earlier this month, in which the empath meets someone everyone has been talking about, and immediately feels bad vibes. Other TikTok empath memes satirized that trend.

“They made it out to be some sort of super power,” Khatib says. “It was mad corny and honestly harmful given how many young people are on TikTok.” She says two of her TikToks were removed for harassment, but she put them back up.

“Empathy is something that everybody feels,” Khatib says, “but the internet has everybody trying to diagnose normal and healthy emotions. The constant need for a label is very unhealthy behavior that’s constantly promoted on TikTok.

“That being said, some people who have autism suffer from hyperempathy due to their sensitivity with social cues. However, just like the terms gaslighting, narcissism, ADHD, and neurodivergent, the internet heard the word once and turned it into something it isn’t and now blame their toxic behaviors on it.”