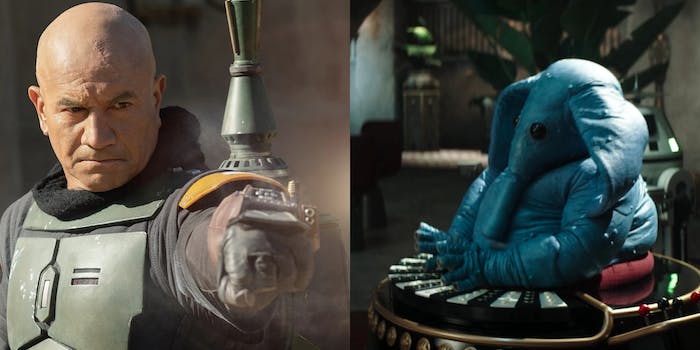 They're also learning about his peculiar anatomy: 'His Max Rebussy is just all over the place.'

The Book of Boba Fett is full of obscure Star Wars callbacks, but one cameo immediately stands out from the crowd: Max Rebo.

The Book of Boba Fett takes place several years later, with Boba Fett taking over Jabba’s crime operation on Tatooine. The first two episodes reintroduce the Max Rebo Band performing at an upscale Tatooine bar, meaning that a) Max unexpectedly survived Return of the Jedi, and b) his career is on an upswing.

It’s not hard to understand why people love Max Rebo. He’s a weird-looking little puppet guy (Star Wars fandom catnip), and he’s a rock star. And thanks to a viral TikTok posted by Star Wars fan @shaylo_ren this week, people are rediscovering a delightful element of Max’s character design: He’s actually playing the keyboard with his feet.

Providing examples of the original Max Rebo puppet and concept art, @shaylo_ren explains that Max doesn’t actually have arms or hands. He’s sitting on a cushion with his legs in the air, and “his Max Rebussy is just all over the place.”

Return of the Jedi positioned the Max Rebo Band as a successor to A New Hope‘s beloved cantina scene—but the band’s role was drastically overhauled when George Lucas remastered the Original Trilogy.

Lucas added several new CGI musicians alongside Max and his bandmates Droopy McCool and Sy Snootles (yes, those are their real names), and completely changed the music. The new version of the scene is pretty cringe, but Max continues to be popular—as proven by the response to his Book of Boba Fett cameos.

Max is precisely the kind of character who works well in Disney’s new Star Wars shows, which thrive on fanservice Easter eggs. People love Max Rebo and want to see more of him—but there’s no outcry for him to have a narratively important role. That means he’ll never be controversial in the same way as famous revivals like Luke Skywalker or Boba Fett himself.