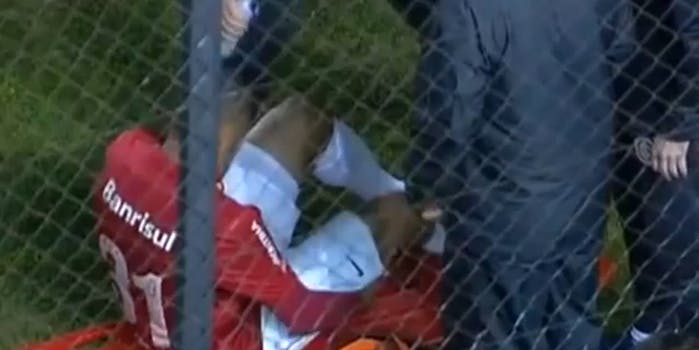 He managed to stick the landing, but the celebration was his last contribution to a soccer game.

He managed to stick the landing, but the celebration was his last contribution to a soccer game.

Maurides, 19, can be forgiven for being excited. He’d been on the field for just eight minutes when he scored his first career goal for Internacional in a 3-1 Copa do Brasil win over America Mineiro. He, as many other players do, opted to mark his goal with a leap:

The 19-year-old sprained his right knee after landing a back flip. The team’s doctor is “optimistic about Maurides’ prospects of recovering from his injury,” the Guardian noted.

A YouTube clip of Maurides’ unfortunate injury is stuck at 301 views, a sure sign the video is going viral.

Maybe while the teen is resting on the treatment table he’ll give some thought to a less dangerous celebration. However, one guy broke his neck while emulating Jürgen Klinsmann’s famed dive celebration across the grass, so maybe backflips aren’t so bad after all.