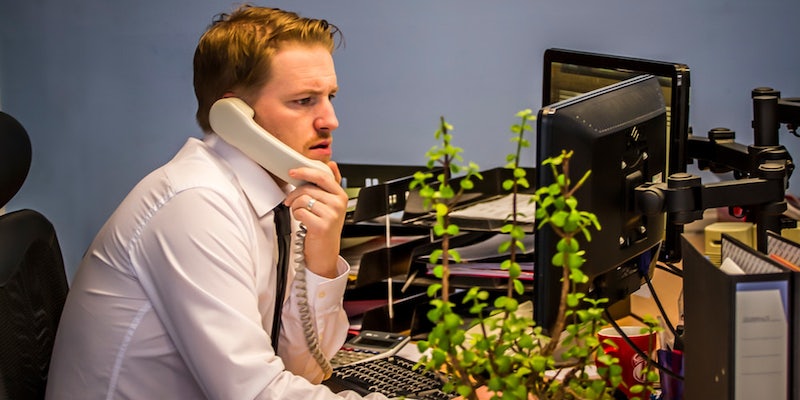 Target, the superstore chain, recently dealt with the most annoying kind of social media commenters: People who jump to conclusions based on headlines while skipping over the rest of an article.

The company’s decision to remove gender labels from toys, opting instead for more descriptive characterizations, was somehow construed as the removal all gender labels in stores and support for some kind of liberal transgender agenda. Comedian Mike Melgaard adopted a canny Facebook disguise—a Target customer service representative—and began calling out the dissatisfied customers as, well, ‘dicks.”

While his stunt went viral, Melgaard was far from first comedian to pull something like this—just the first to get that kind of palpable endorsement.

The best and brightest of the customer service trolling business are the brains behind We Hope That Helps, founded by Atlanta’s Ben Palmer and lovingly maintained with assistance from Nick Price and Ryan Shipley. And while not all of their favorite customer complaints have potentially offensive social implications, a large swath absolutely do.

“If they’re not gonna respond to me, then I’m just gonna start responding for them.”

When asked about the worst commenters he’s seen so far, Palmer came up with an answer right away. “The people who supported the Duggars were really, really getting behind them,” Palmer told the Daily Dot. “They would go on the pages of the companies who pulled their sponsorship from TLC and be like ‘I’m never shopping at your store again!’ Somebody was on Payless[’s Facebook page] and said ‘I’m taking my money elsewhere,’ so we said ‘you could buy the To Catch a Predator DVD collection on Amazon.’”

Spelunking in the depths of comment sections is tough when it’s part of your job; what makes it fun for Palmer?

“I believe it was little bit after New Year’s [Day 2014],” he said. “I was doing a lot of posts on company pages, just asking ridiculous questions and seeing if I could get a response from them. I would sometimes, but most of the time they wouldn’t respond. I was looking for something more and something to do, so one night I went on Uber’s page, and that’s when I discovered that all of their customers post on their page, and they have a customer service team that responds to them. I noticed that Uber wasn’t really responding to all of their complaints at the time, so that gave me the idea: If they’re not gonna respond to me, then I’m just gonna start responding for them.”

Later, though, Palmer fleshed out how his motivations went a bit deeper than a general lack of customer service responses: He was also fired from a typing job. Officially, it was for not filing the proper vacation paperwork after his bosses saw photos of him at the beach on his Facebook page.

“What happened was it was a typing job,” Palmer said, “and I had a hard time doing it because it was really boring and I was going through a bout of depression,” he explained. “I told them about it, and they said if you don’t want to come in, you’re having a hard time, just call us.’”

That weekend, Ben went to the beach with his brother. On Monday, though, he didn’t go back to work. “I just called them and said ‘Hey, I’m not coming in today.’ But I didn’t say why.” He didn’t intend to deceive them at all, but in light of what he had said previously, they treated him as if he had. “They called me and fired me, they said I didn’t file the proper vacation request form. That kind of fueled me, though, because if you’re gonna go on my page, then I’m gonna go on your page, as far as all of the corporations. If you’re gonna use our private profiles to fire us and punish us, then we’re gonna go on your page and do whatever we want.”

So far, no action has been taken by Facebook against the accounts being used, because they’re not technically breaking any rules.

And do whatever he want he has. So far, no action has been taken by Facebook against the accounts being used, because they’re not technically breaking any rules. Given that each faux customer service agent is a Facebook page as opposed to an account for an individual person, they’re not running afoul of Facebook’s “real name” policy, for example.

“If you have your own page, you can use the page to comment anywhere you want,” Palmer noted. However, there’s a legitimate need for multiple pages, because the company pages themselves will block them.

“We look for people who have ridiculous complaints, or come with insufficient evidence,” Palmer explained. “One lady said she had been on hold for 30 minutes but the screenshot of her phone said that it was only nine minutes and 24 seconds. That connects more with people. When people are trying to get free stuff, or just be too mean, they lose their bargaining power, and open themselves up for us to come in and make fun of them.”

Customers of pizza chains like Domino’s have made a habit of posting photos that don’t offer any proof of the complaint, like a pie being delivered cold. In another unsurprising example, Palmer remarked that “you’re gonna have a field day with the cell phone companies, those people are all gonna be upset.” Of the companies they frequent, Palmer says, “we’ve been blocked by almost everybody,” though some, like Chipotle, are quicker on the trigger than others. Others, like Red Lobster, have an unusually positive pattern of customer engagement, with a steady stream of happy patrons posting photos of themselves enjoying the finest in satisfactory seafood.

“You’re gonna have a field day with the cell phone companies, those people are all gonna be upset.”

Even with the companies who seemingly “get it” or demonstrate some social media savvy, an endorsement of the faux representatives has been difficult to come by. Palmer told Daily Dot that “no one really acknowledges us. The only time they acknowledge us is when they’re defending themselves and telling the customer that’s angry at our post that this person doesn’t work for the company. They never say ‘that customer service account…’ it was like, ‘Those people no longer work for us.’ Kroger recently was like, ‘We’ve taken steps to ensure that they can no longer comment on our page. But we still can. [laughs] We just make another page.”

It’s unlikely that We Hope That Helps will run out of steam anytime soon. As long as companies continue to attempt to embrace social Facebook, and especially if they do it badly, there will be a place for someone to have fun at the worst customers’ expense. Just look at the scope of the support for the Duggars that rankled Palmer so much.

“There [are] a lot of those people,” he said. “Almost every company that pulled their sponsorships from TLC got hate mail from those people.”

If all of those people would tear into a discount shoe store chain for pulling sponsorship from a TV show show that was glamorizing a child molester, imagine how many will sound off about perceived injustices that don’t actually harm anyone.