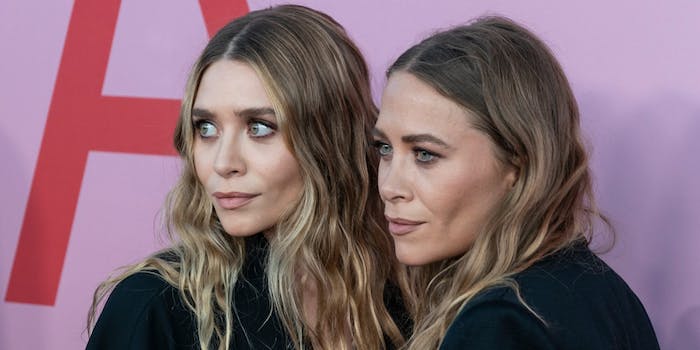 People are reminiscing on the 'bowls filled with cigarettes' famously featured at their wedding.

Mary-Kate Olsen’s divorce from husband Pierre Olivier Sarkozy has been held up for a second time due to the coronavirus pandemic.

Olsen originally filed a petition for divorce on April 17, but the petition was not accepted, according to TMZ. At the time, New York courts were not accepting non-emergency divorce filings due to COVID-19.

Now, Sarkozy’s lawyers have informed Olsen via email she has to move out of her and Sarkozy’s New York apartment by May 18. Olsen said she cannot meet Sarkozy’s deadline due to COVID-19 restrictions and requested an extension to May 30.

Olsen claims Sarkozy terminated their lease without her knowledge. The only way to stop Sarkozy from disposing of her things is to file a petition for divorce. To push her divorce through quickly, Olsen requested an emergency order, which would prevent Sarkozy from removing any of her belongings, according to E! News.

Olsen also requested their prenup be upheld, according to E! News.

Olsen and Sarkozy started dating in 2012 and got married in 2015. Fans have mixed emotions about the divorce and are reflecting on Olsen and Sarkozy’s relationship. Particularly the intimate New York wedding that famously featured “bowls and bowls filled with cigarettes.”

Mary-Kate and Ashley Olsen are known for keeping out of the spotlight. The reason for Mary-Kate’s divorce is unknown, but some have speculated it’s related to her 17 year age gap with Sarkozy.

“Mary-Kate is just 27 but comes across as a lot, lot younger,” a source close to Sarkozy previously told E! News. “She’s clearly very excited about the chance to get married to a very successful, well-educated man, but life isn’t always that simple. He’s already got kids and is very happy with his status in life.”