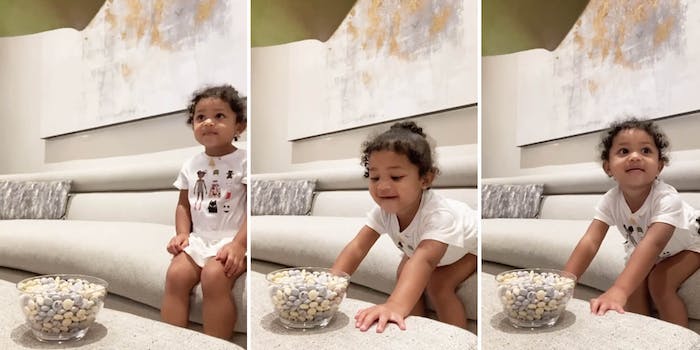 Kylie Jenner did the ‘Fruit Snack Challenge’ with Stormi, and the internet is in love

Bored quarantined parents have recently taken to subjecting their bored quarantined children to a phenomenon known as the “Fruit Snack Challenge” on TikTok and Instagram. Essentially, the challenge involves a parent setting out a bowl of fruit snacks or other sweet treats for their child and then telling them that they’re not allowed to have any until the parent leaves the room and subsequently returns. If the kid abstains, in theory, they pass.

According to Know Your Meme, the first known instance of the Fruit Snack Challenge occurred on April 27 when TikTok user Victoria MarCrazy uploaded a video (above) of her toddler daughter passing the challenge, and it quickly went viral from there. We don’t expect to see the challenge go away anytime soon, because on Monday Kylie Jenner participated with her extremely adorable and photogenic two-year-old child Stormi Webster, and it would appear that the internet is smitten!

In Kylie’s video, she sets a bowl of chocolates in front of Stomi, who seems to be preoccupied with watching Finding Nemo. “You can only have three of them,” she tells the precocious child. “But wait—you have to wait until mommy comes back, OK? I have to go to the bathroom.”

Stormi does an excited shimmy and agrees to wait. After a few seconds go by, she almost gives into temptation but stops herself. “Patience, patience, patience,” she sings. When Kylie finally comes back into the room, she lets out an excited squeal and prepares to dig in.

Regardless of how one feels about the Kardashians, the video is enough to warm the coldest of ovaries. The video was viewed nearly 30 million times within 12 hours, and the adoration spilled over onto Twitter where people are gushing over both Stormi’s cuteness and Kylie’s apparently excellent parenting skills.

Some imagined Stormi’s Fruit Snack Challenge as her big break into the music industry:

And of course there were memes:

If her auntie Kim Kardashian is (albeit falsely) credited with breaking the internet, then Stormi just put a pretty big dent into the Fruit Snack Challenge. We’d expect little else from this family.