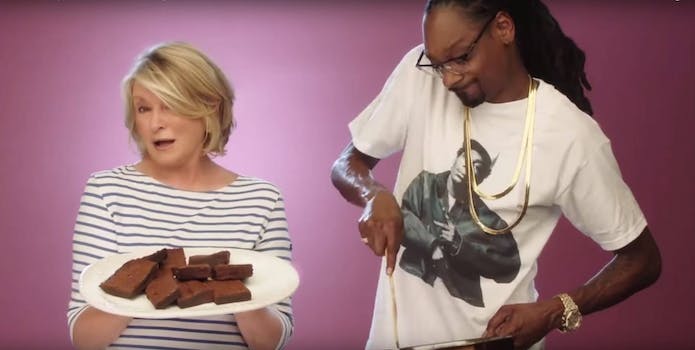 Did Martha Stewart just flip off a portrait of Donald Trump?

The photo was quickly made private. But not before it was recorded for posterity.

As recently as a couple of years ago, few people would’ve ever expected to see Martha Stewart flipping off an enormous portrait of the president of the United States. But that was then, when Barack Obama was sitting in the White House and a conventional successor seemed like a solid likelihood, and this is now, with Donald Trump sitting in the Oval Office and Stewart angling her middle finger toward his likeness.

The photo was reportedly taken at the Frieze Art Fair in New York this weekend, with Stewart posing between a portrait of Trump on the left, and Snoop Dogg, the co-host of Martha and Snoop’s Potluck Dinner Party, on the right. To Snoop, Stewart flashed a V sign with her index and middle finger. To Trump, however, only the middle finger was extended.

According to the Hill, the account that posted the photo of Stewart flipping off Trump was set to private not long after, and another, far more PG-rated version was posted on Stewart’s official Instagram, showing her offering the same V sign to both portraits. Perhaps the initial picture was deemed just a little too edgy, who knows. But thanks to social media, both of them will live on.

Stewart, for the record, was a public supporter of Hillary Clinton during last year’s presidential election, although she hasn’t been breathing fire about Trump’s victory or presidency. To the contrary, she congratulated him following his win, and according to the Chicago Tribune, urged people to give him a chance a week after the election.

“Guess what? Things change and you can’t be moaning when you can’t change what happened,” Stewart said. “Go with the flow!”

From the looks of things, her private attitude toward Trump may not be quite as rosy as before.