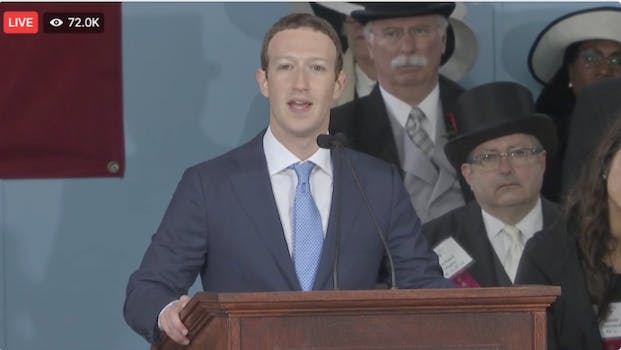 Facebook founder Mark Zuckerberg returned to Harvard today, nearly a decade-and-a-half after dropping out, to deliver the commencement address to the class of 2017.

And since you’ve probably never seen a Harvard commencement address, it’s OK if you assumed the seats are always filled with upper crust, John D. Rockefeller and John Jacob Astor types. You know, the oil magnates and railroad tycoons who helped the university reach a billion-dollar endowment.

Which, LOL, fun, guys, but it’s just another college. It’s not anything like that.

Just pop into the livestream of the speech and see—

We now go live to Mark Zuckerberg addressing the passengers of the titanic pic.twitter.com/yRkZDuiW6K

That’s worse than I expected.

why he giving a speech in front of literal robber barons pic.twitter.com/JwuE50zZWg

If this is Zuckerberg's butler sitting behind him, then I'm sure Mark is a real life Batman. #MarkZuckerberg pic.twitter.com/rfjrLNb7Vz

Holy crap, Harvard really is nothing more than the 19th-century billionaires who pillaged this country for their own gain. (And animals in top hats. No, really, those are everywhere.)

I question the optics of who Zuckerberg surrounded himself with at that speech pic.twitter.com/YMbN3eL7SP

And while the internet wasn’t busy mocking the people who have it much, much, so much better than us, they took solace in the fact that the rinky-dinky invention of Zuckerberg’s barely even worked.

Take that, you sixth-richest man in the world.