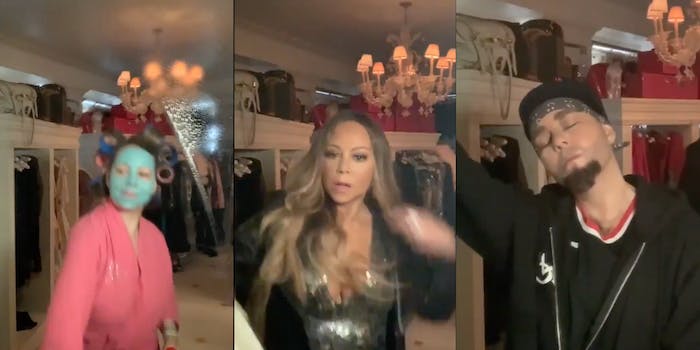 'Queen Mariah Carey just made the best TikTok of all time.'

To celebrate the 12th anniversary of her hit song “Obsessed,” musical legend Mariah Carey shared an updated version of the wipe it down challenge, which became popular on TikTok back in 2020.

Carey didn’t just become a glammed-up version of herself, as the trend entails. She also reprised her role as the male stalker who was heavily featured in the music video for “Obsessed” and rumored to be Eminem.

According to AceShowbiz.com, this character is widely believed to be based on Eminem, who claimed in 2002 that he and the singer had dated for six months, which Carey denied. “Obsessed” is regarded as a diss track from this feud.

Carey posted the video to Twitter and TikTok on June 16.

“Just for laughs… from last year’s lockdown when all I did was wipe tings down,” Carey’s post reads.

The video starts with Carey in a pink robe, green face mask and hair rollers. She then switches to the glammed-up version her fans are so used to seeing. The video also features a remix of the “Wipe It Down” song featuring Carey saying, “Why are you so obsessed with me?” And with another swipe of the mirror, an imitation of the stalker from her “Obsessed” video—who is also played by Carey—appears.

This reference was not lost on her followers.

“Mariah won’t take her foot off M&Ms neck,” one fan wrote, seemingly referring to the time Carey shaded the rapper on Watch What Happens Live.

One user called the video “the best TikTok of all time.”

And other fans are simply upset that Carey waited a whole year after making the video to post it. “WHY TF DID SHE NEVER POST THIS????? she wouldve won the bottle cap, fantasy, AND wipe it down challenges,” one proclaimed.