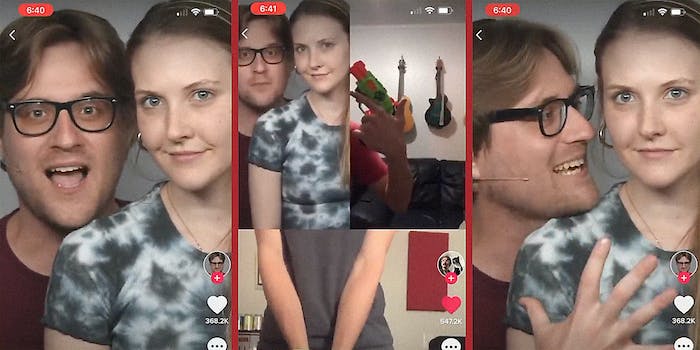 It quickly goes off the rails.

One person’s genuineness can easily be another person’s cringe. In the case of one TikTok video going viral across multiple platforms, one TikToker’s attempt to introduce followers to his girlfriend went off the rails after many interpreted the video much differently and framed it as a hostage thriller in remixes.

Marcus DiPaola uses his TikTok account to report out news to his more than 2.5 million followers in a way to make them accessible for younger audiences, and in many of those videos, his voice is monotone as he reads out the news. But last week, DiPaola took off the reporter hat and brought his girlfriend Brittany Bell. May 4 marked both Star Wars Day and his birthday, so he was pretty excited to introduce Bell—who rescues rabbits—to the world. He’s far more enthusiastic, speaking with much more emphasis and excitedly than some of his followers may be used to. Bell is mostly shy and quiet apart from saying hello with a wave to the camera; she nods and agrees with DiPaola. It’s a pretty awkward video but fairly harmless.

In a YouTube video from last week, there’s a lot more nuance to DiPaola and Bell’s on-camera relationship. Without the time-limit of a TikTok video, they’re able to riff off each other and be much more comfortable, and be silly without worrying time restraints; she even breaks out a lightsaber at the end and reminds DiPaola that it’s Star Wars Day. In another video posted on YouTube over the weekend, Bell is far more in her element as she demonstrates what goes into rescuing a rabbit and then removes ticks from the rabbit’s fur.

But for some viewers on TikTok, DiPaola’s video felt more like the beginning of a hostage video, or at least one she may reluctantly be apart of. Many of the more than 6,100 TikTok duets that use DiPaola’s audio lean in on the idea that DiPaola is holding Bell hostage.

At first, the duets and additions to DiPaola’s original video are small. A TikTok video from @mccurdy.sam posted two days after DiPaola’s added an arm wearing a red shirt holding a plastic gun to the right of the original video. A second duet from @themichaelspencer included footage of someone whose wrists are tied with rope but is able to get one hand out long enough to wave to the camera.

A third duet from @trapboombap gives DiPaola another arm that he uses to help emphasize conversation, and a fourth from @kappes10 includes two pairs of legs beneath the other duets placed around where DiPaola and Bell would be standing. @theycallmethegreatest_ included an outside element by looping in someone with a gun in hand (in the form of a remote control, giving the duet a DIY element) ready to burst into the room while @mr.tukua acted out law enforcement trying to negotiate with DiPaola from outside the home. And @themikeandmoshow provided the media angle by filming a breaking news bulletin.

From there, the remixes and duet chain turned into something both beautiful and chaotic. People zoomed out to include the teleprompter, the boom mic operator, and the average viewer watching this all fold out on their TVs; another duet added a sign language interpreter. In a different iteration, one person added in an additional hostage. In some of the duets, there are snipers positioned outside, a van full of children ready to execute an operation, a drone capturing the scene from above, a reporter on the scene, a close friend speaking to reporters, the U.S. President speaking to the nation, and SEAL Team Six executing an operation.

Even Captain America gets involved in one video.

There are now so many videos on the duet chain that after a certain point, it’s almost impossible to decipher the videos from one another. So a few people decided to edit several TikToks into a short film.

Given the limits of DiPaola’s original video, there isn’t a clear way for the story to end; he’s returned to posting news-related TikToks. But the duet chain showcases not only the levels of creativity that TikTokers have but also just how well everyone seems to know the beats of a hostage thriller.