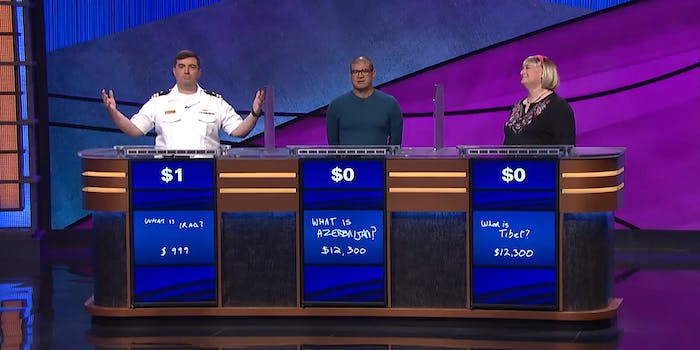 Man wins ‘Jeopardy!’ with $1—and the internet is going wild

A goal we can all strive for.

Earlier this month, the internet was infatuated with Austin Rogers, the Jeopardy! champion who made big wagers. Now a new contestant is gaining fans. Manny Abell won Jeopardy! last night with $1. Yep, just $1. According to the show, no one has won with $1 since 1993.

Screenshots of Abell winning $1 and throwing his hands up in the air quickly went viral.

THIS IS THE DRAMA I LIVE FOR pic.twitter.com/zRfX46SDVW

When you bomb the test but set the curve https://t.co/wMRsL2gQFa

Just watched an epic @Jeopardy battle…are you kidding me Manny!? Wins with $1 😳 Now I've seen everything!

He sure makes competing on Jeopardy! look easy.