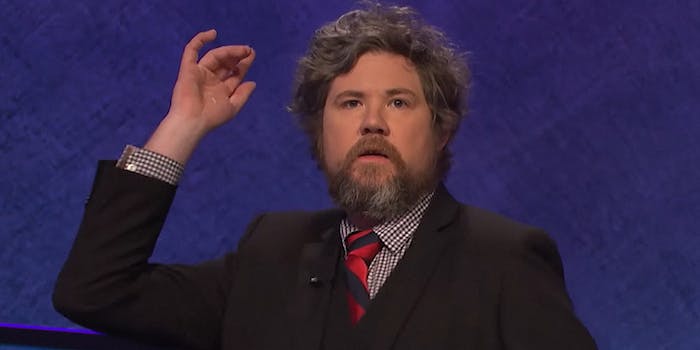 Is the latest ‘Jeopardy!’ champion a lovable weirdo or an obnoxious child?

New York bartender Austin Rogers is gaining a rabid online fan base after a week-long winning streak on Jeopardy! Rogers, who has won a total of $278,300 so far, is known for his confidence, hand gestures, big wagers, and general quirkiness. On Twitter, there’s a hashtag for him, #austinonjeopardy, which the contestant himself uses when talking about the show.

In the bio of his personal Twitter profile, Rogers jokingly takes credit for things he did not create: “MC. Writer of Black and Yellow. Owner/Executive Chef, Nobu. Architect of Falling Water and Burj Khalifa.”

This is the style of humor that has made the internet both love and hate him.

His popularity is fueled by GIFs and memes of his moments on Jeopardy!

Austin Rogers is not of this world. #Jeopardy pic.twitter.com/ApP8bIM83T

The best thing on TV today? Austin, the best contestant #Jeopardy has ever seen. Would love to see the unedited episode… pic.twitter.com/a35NGdRyPF

His fans are enthusiastic.

There are two types of people in this world: people that like #austinonjeopardy and people that don’t matter.

This dude Austin on #Jeopardy is an absolute LEGEND. pic.twitter.com/Tfnreiq1x9

But there are others who dislike Rogers.

I bet Austin on #jeopardy was an exhausting child to raise.

Some people called him racist and referenced a joke he made about the Dalai Lama.

JEOPARDY: current champ Austin is smart, a ballsy gambler, but also obnoxious and casually racist. the duality of man!!

Others called him a hipster, and Rogers responded to the accusation. Apparently, he is not a hipster.

I am most definitely not a hipster.

He also doesn’t make fancy cocktails. “I’m a bartender,” he told one fan. “Not a mixologist.”

I'm a bartender. Not a mixologist. I'll get you a Guinness and a Tully and that's about the extent of my skill set.

And he doesn’t care if you hate him.

I drink your tears.

Whether you think he’s brilliant or annoying, Rogers is still winning a good chunk of change from knowing a lot of random facts.