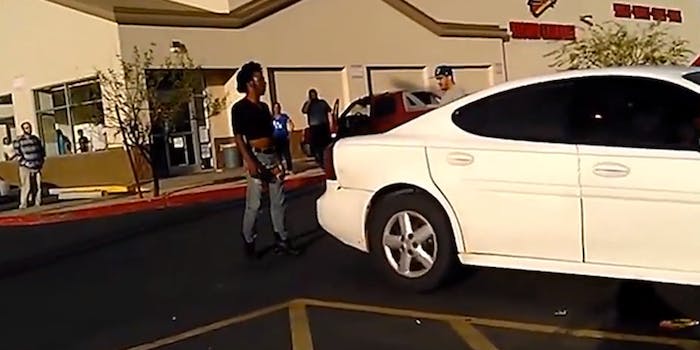 This dude has the instincts of a Hollywood action hero.

In a feat worthy of John McClane or Jason Bourne, 24-year-old Justin Finch held fast to a car that ran him over in a Phoenix parking lot—even as its driver tried to speed away.

Bystander Shaina Russell caught the shocking turn of events on video. “That motherfucker,” another witness can be heard to remark. “You see shit like this in the movies.”

According to Finch, who despite being pinned between two vehicles came away with nothing more than superficial injuries, this was the tail end of a confrontation that began when the people getting into the car leveled a gay slur at him. He admitted to slamming one man to the ground in the ensuing scuffle, Fox reported. Cops stopped the car a half mile away from the scene of the fight, though everyone involved declined to press charges at that time.

However, passenger Orlando Munoz, 16, claimed to have been assaulted by Finch. His uncle and his uncle’s girlfriend were also in the car, the latter allegedly behind the wheel. Munoz’s mother, Yvette, who is gay, described the incident as “foolishness,” saying that “both parties should have walked away,” and insisted that the apparent hit-and-run was in no way motivated by bigotry.

Nevertheless, a police unit that focuses on hate crime is investigating.