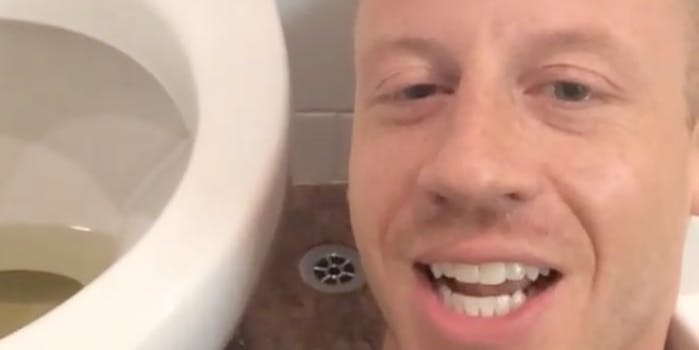 Macklemore just did something unspeakable on the toilet

The Grammy-winning rapper added something new to his oeuvre today: a reggae-inflected song about pee.

Grammy-winning rapper Macklemore added something new to his oeuvre today: a reggae-inflected song about pee.

The exclusive track, published only on Instagram, is a PSA of sorts—a guide to toilet etiquette for dudes, a pro-tip for cohabitation, along with a message delivered in true Macklemore style. There’s no way to do it justice besides quoting it verbatim:

ITS TIME THAT US MEN STARTED RESPECTING TO THE BASIN THAT OUR QUEENS SIT ON! LETS RAISE THE NEXT GENERATION TO HAVE BETTER AIM SO WOMEN DONT HAVE TO PEE & POOP ON OUR PEE!…and IM NOT TRYING TO POOP ON YOUR PEE EITHER! BASICALLY, TO ALL THE FRAT GUYS AND SHITTY DADS, QUIT FUCKING UP THE DEUCE SESH FOR THE REST OF US! BUMP THIS CUT IN ALL AIRPORT BATHROOMS AND FOOTBALL GAMES! FUCK A DRUNK DAD PISSING ON THE GROUND, AND A FRAT BRO TOO HAMMERED TO HANDLE HIS DANGLER! MAN UP AND LEARN DONG CONTROL!…IM OUT!!!

Sing it with me now: “Unzip the zipper when you pull out your D / But make sure you lift up the toilet seat / Come on / Wipe the basin, clean the pee pee / And now my girlfriend won’t be mad at me / Shabba.”