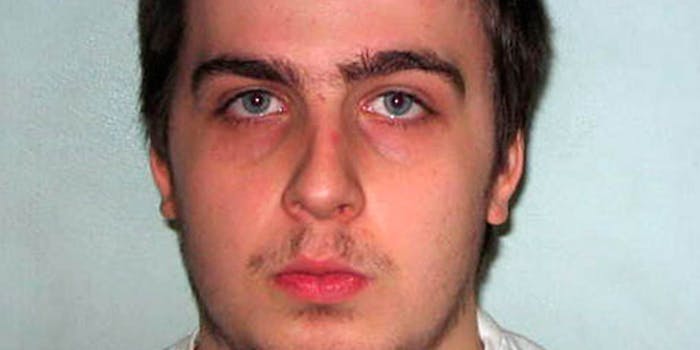 A convicted LulzSec hacker is about to become a free man—despite the fact that police found troves of child pornography on his computers when they busted him in 2011.

Ryan Cleary, 21, was sentenced to 32 months in prison for his activities with the hacker group, which left a trail of bedlam across the Internet in 2011, including high-profile attacks on the CIA and Sony.

His punishment for possessing 172 images of child pornography, however, is far more lenient. Earlier today, a London judge sentenced him to community service, even as she declared that the images, which showed children as young as 6 months old, would “make any right-minded person concerned.”

That means Cleary’s release is imminent on account of time served and his guilty pleas to all charges.

According to his lawyers, Cleary suffers from Asperger syndrome, a type of autism. They argued the condition played a key role in his decision to download the images, that Cleary had an impulsive desire “to see everything the internet had to offer,” as the Guardian put it. Cleary was not a career sexual predator, the lawyers argued: Every single image on Cleary’s two computers had been downloaded in a single day. It was a one-time thing, they said.

That was enough to convince judge Deborah Taylor that Cleary’s time served was enough punishment. “I have… taken into account that although the sentencing guideline recommend an immediate custodial sentence, time has been served in any event,” she said, according to the Guardian

At the time of the arrest, Cleary was a complete recluse, living at home with his mother, whose interactions with her son consisted primarily of leaving meals on the floor outside his bedroom door.

The court also barred Cleary from working with children. He’ll be placed on Britain’s sex-offender list for five years.

Photo via The Metropolitan Police/The Guardian