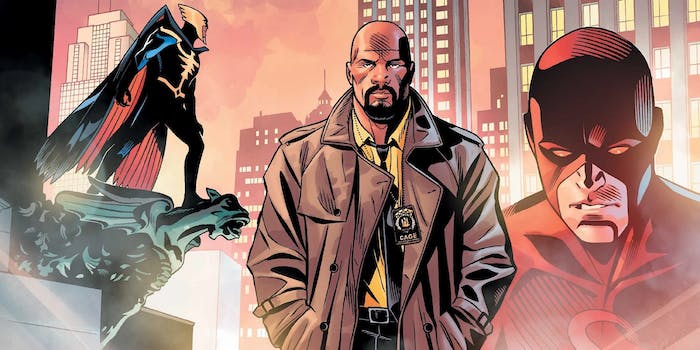 An upcoming Marvel comic is facing criticism this week, thanks to a tone-deaf choice to reboot the Black superhero Luke Cage as a cop. Created in the 1970s, Luke Cage originally took inspiration from the blaxploitation genre. And while earlier iterations sometimes included dubious elements by white creators, he soon became an iconic (and politically resonant) Marvel hero.

Working under the title “Hero for Hire,” Luke Cage generally stars in gritty, street-level storylines alongside characters like Jessica Jones. His bulletproof skin plays into political allegories about racism and police violence, and his origin story begins with him being incarcerated and then volunteering for medical experiments in prison. Joining the police force is antithetical to his typical recurring themes, but that’s exactly what will happen in Heroes Reborn: American Knights. In this comic, an alternate-timeline version of Luke Cage is a police commissioner tasked with cracking down on vigilantes. So far, the reactions on social media have not been positive:

On the one hand, this is a temporary spinoff rather than the main Luke Cage character. On the other hand, the basic idea shows a real failure to read the room regarding Luke Cage’s importance as a Black superhero. Marvel and DC have both gone through a number of racism scandals over the past few years, both behind the scenes and in terms of how nonwhite characters are represented on the page. Making Luke Cage a cop is exactly the kind of choice that leads people to mistrust Marvel’s repeated assurances about diversity and inclusion.

This Luke Cage comic also plays into a troubling trend: Black superheroes being rewritten into military or law enforcement roles after they grow to mainstream prominence.

This arguably happened with Sam Wilson (aka Falcon), who originally had a more fantastical origin story but is now inextricably linked with the U.S. military and (in the MCU) has a squeaky clean image as Captain America’s sidekick. (He’ll soon get a more independent role on Disney+, but with explicitly patriotic and military overtones.) Miles Morales’ dad Jefferson Davis (a name that inspired its own criticisms) was rewritten as an NYPD/PDNY officer for Spider-Man: Into the Spider-Verse and the Spider-Man video game. His role depicted the NYPD in a positive light that didn’t gel with real-life reports of racism and police brutality. And the MCU’s version of Monica Rambeau is now a government agent with an implicitly law-enforcement role, rather than being a more independent superhero, like she is in many comics.

These storytelling choices are invariably made by white creators, which is also what happened with the new Luke Cage comic.

Sometimes these decisions are inspired by a desire to update older ideas that feel dated or racist themselves, but the end result often feels like copaganda, using Black characters in “good cop” roles that elide the fraught politics of policing in America. So while this new Luke Cage comic may just be an alternate-timeline spinoff, there’s a real reason why people are annoyed.