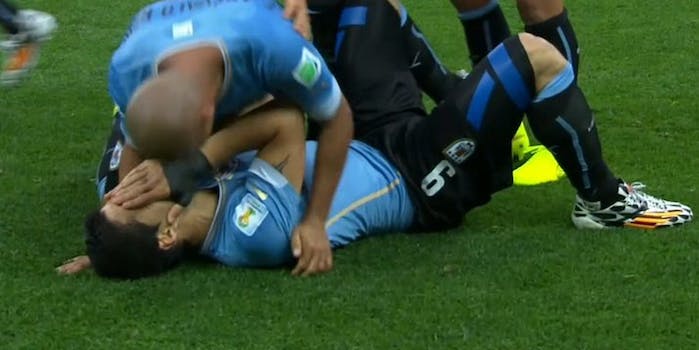 The best striker in England just scored against England

Luis Suarez is a mongoose.

England and Uruguay—two former World Cup champions—are in a dogfight to avoid virtual elimination from Brazil 2014. The losing country would be at the mercy of Friday’s Italy vs. Costa Rica game.

Luis Suarez proved to be the edge at halftime.

If you’re watching the World Cup with unfamiliar soccer knowledge but American sports instincts, let me vindicate that gut feeling: Yeah, the World Cup is basically March Madness in that you can have a streaky guard (Kemba Walker, Shabazz Napier) catch fire for three weeks and carry you to the end.

Enter Suarez: At least the third best player in the world and–before a meniscus injury in practice require arthroscopic knee surgery last month–the hottest striker in the game. He’s been a dangling question mark over every soccer analyst’s projections and brackets.

Uruguay took precautionary measures and sat Suarez Saturday against Costa Rica–gambling on its ability to win without his touch. La Celeste lost to the North American minnow, 3-1.

If Suarez can garner three points for his homeland Thursday, Uruguay has the ceiling to carry that potential deep into the knockout rounds. Suarez is all insticts–he can just make the run and it’s like he has eyes everywhere, so it’s just about poking and contorting his frame at precisely the right moment.

For its part, England could be facing crossbar-tipping heartbreak from its proud but Shakespearean-level tragic son, Wayne Rooney.