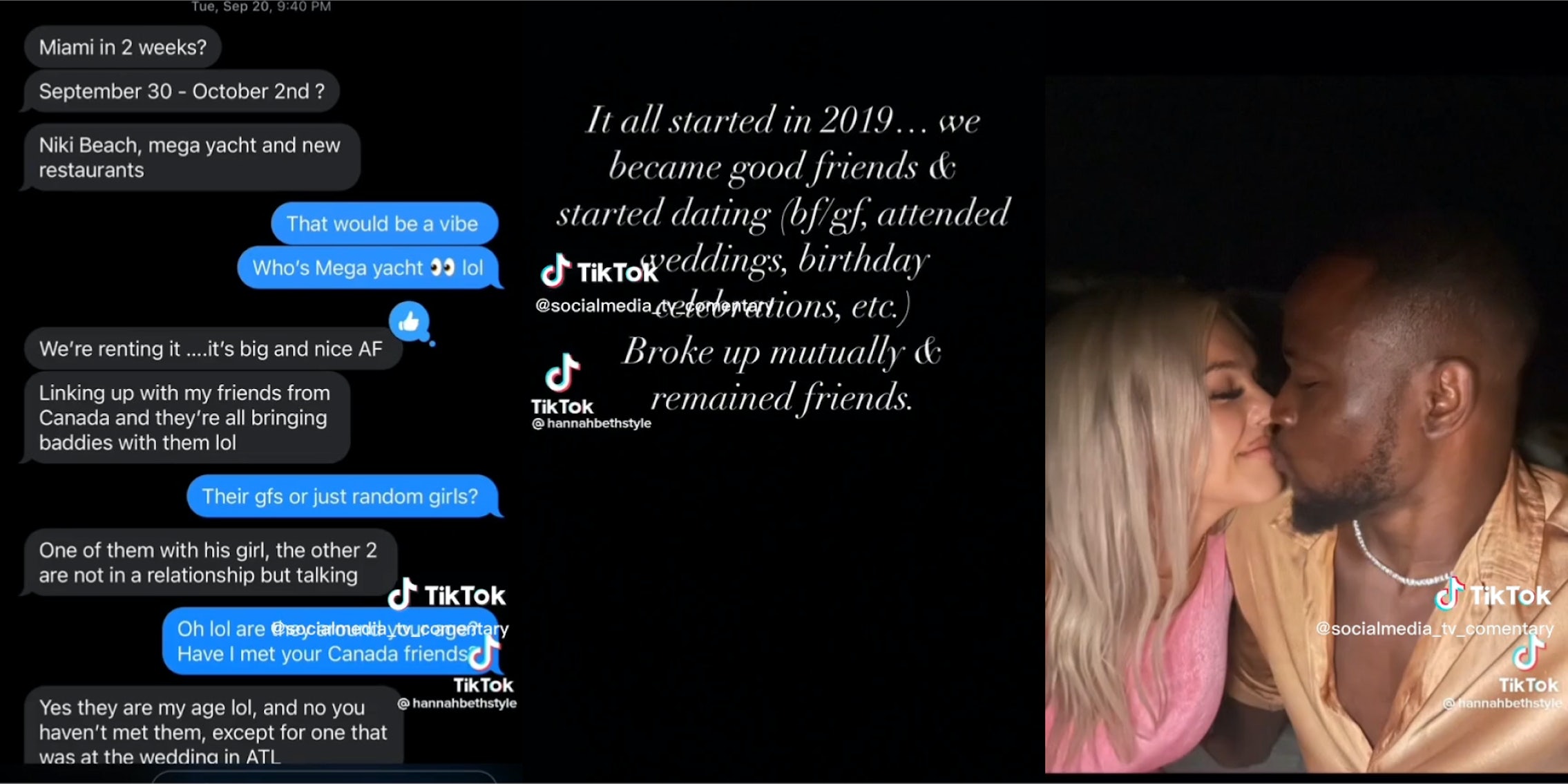 'Put a finger down if you went on a date in April with a guy from Hinge, and then you see that he's actually on the show Love is Blind.'

After gaining infamy for being the most “unproblematic” man on season three of Netflix’s Love is Blind, contestant SK Alagbada has been exposed on TikTok by multiple women who claim that he was dating them during the show and during his relationship with now ex-fiancée Raven Ross.

In a now-deleted video posted by TikToker Hannah (@hannahbethstyle), she alleges that she started dating Alagbada in 2019, showing pictures of the pair during their relationship. Text overlay explains that they “broke up mutually” but “remained friends.”

“Fast forward to late July 2021.. he invites me to go to Europe,” the text overlay reads. According to an article by Cosmopolitan, season three was filmed in “summer 2021,” shortly after season two.

In the clip, she includes screenshots of text messages with a contact, “SK,” in which he asks her if she’s seen the “orange shirt” he wore during their trip. A video of him wearing the orange shirt and kissing Hannah at a hotel in Ibiza follows.

“We left Ibiza and flew back to Madrid. I asked to see his phone to send pics to myself but ended up being texts from a contact name ‘fiancé,'” text overlay continues. “I asked about finding a ‘fiancé’ in his phone, and he told me it was for the LIB show, but it was just for $, and they were friends only.”

She continues to explain that she told him that she should “meet Raven if this is all fake,” which she claims he agreed to. Hannah says that she followed Ross on Instagram and “liked her pictures” but saw that she messaged Alagbada shortly after asking, “Umm… who is this?”

She says they went to Cabo, Mexico, in May 2022 for a “couple’s trip” and visited each other again in August. She also claims that he invited her to come to Miami in September.

My jaw just dropped! SK is a wild man. I was rooting for him and Raven. 😱😭 #LoveisBlindS3 #LoveIsBlind pic.twitter.com/GhE7AopbHk

TikToker @emmwho9 also claims that she matched with Alagbada on Hinge and went on a date in April 2022 in a now-deleted video.

“Put a finger down if you went on a date in April with a guy from Hinge, and then you see that he’s actually on the show Love is Blind and that he met you after the show was filmed but is still with the same girl right now,” she says in the clip.

In a follow-up video, she also shared screenshots of their conversations and a screen recording of her clicking on Alagbada’s Instagram profile and scrolling through their direct messages.

According to a post on Ross and Alagbada’s Instagram stories announcing their breakup, the cheating allegations have also sparked “legal proceedings,” which prevent them from addressing the situation publically at this time. Many viewers suspect that Alagbada may have violated his contract with Netflix for discussing the show with the women he was dating.

Well. Raven and SK have called it quits pic.twitter.com/EKoPwJzNM6