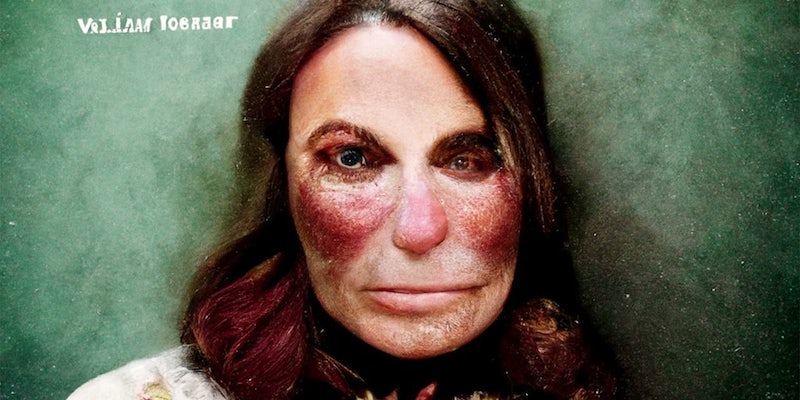 Loab is ‘an emergent island in the latent space.’ It’s also a meme

'The mystery of where it came from is also kind of educating people about how it works.'

It’s not a creepypasta, but it has become a copypasta. It’s “Loab,” the name for an AI-generated image of an unsettling woman with red cheeks that was revealed on Tuesday. Now, she’s a meme.

On Tuesday, the Twitter account @supercomposite posted a thread about Loab, who was “discovered” in April via AI reproduction, using “negative prompt weights.”

The thread contains several images of Loab, many of them looking like images out of a horror film. Some are marked as sensitive content.

“Since Loab was discovered using negative prompt weights,” Supercomposite explained in the thread, “her gestalt is made from a collection of traits that are equally far away from something. But her combined traits are still a cohesive concept for the AI, and almost all descendent images contain a recognizable Loab.”

“A recognizable Loab” takes on an ominous air as the thread produces more chaotic and distorted images, which of course made some latch on to the idea that this was a supernatural entity or internet demon. As Supercomposite describes, Loab is “an emergent island in the latent space that we don’t know how to locate with text queries.”

Another account, ai_curio, claims they were “around for the original creation of loab and i can confirm this is not a creepypasta, this is an actual anomaly in latent space that infects images and it’s incredible.”

People pondered what this means for AI, after a summer of DALL-E and discourse about AI-generated art. Supercomposite is part of a fairly new collective of AI artists called AWAY (Are We Art Yet), and tells the Daily Dot that “the immediate reaction is actually very heartwarming, almost”:

“In the past weeks, there has been a lot of fear about AI from traditional artists and a lot of fighting. People are worried about losing their livelihoods and some people developing this tech are pretty oblivious to their short-term concerns.”

Eventually, Twitter did what it does: The text of the original post was copied and pasted onto other images, creating a copypasta meme.

Supercomposite says it’s been nice to escape the fighting about AI-generated art for a bit and gather around Loab, even if now they’re assuring people she is not a demon: “But I do kind of think it’s funny that I have set into motion a satanic panic about AI. At the same time, the mystery of where it came from is also kind of educating people about how it works.

“People are saying it’s the first AI art thing they’ve found meaning in. For a lot of people, it’s probably the first thing they’ve seen that’s not just trying to copy a style or look super ornate and dazzling just for the sake of being dazzling. It’s imperfect; actually it’s a disaster, it’s totally wrong. And it’s a story of creative exploration that is missing from all of the dazzling tech demos about what AI can do.”