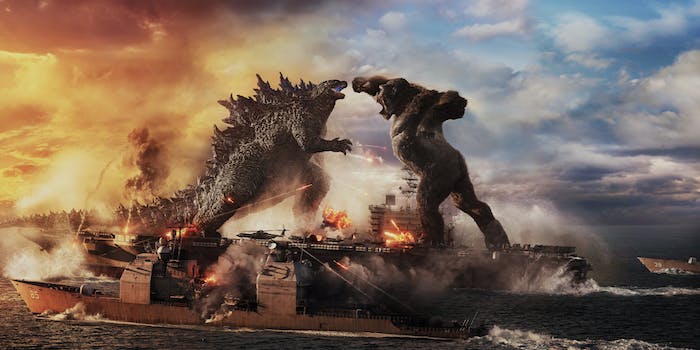 ‘Godzilla vs. Kong’ delivers on an epic smackdown

But the human elements are more hit-and-miss.

If a film title instantly pits two entitles against each other—whether they’re superheroes, longtime rivals, horror juggernauts, or mythological creatures—the fight needs to deliver. Fortunately, in the case of Godzilla vs. Kong, the fourth entry in Legendary’s MonsterVerse, it more than serves up the epic smackdown. No matter where they’re fighting, Godzilla and Kong have little care for collateral damage or the human cost that comes after each creature’s need to have dominance over all; humans are little more than flies to them. (Albeit flies with access to nuclear weapons that will only make one of those creatures even more powerful.)

Release Date: March 31, 2021
Director: Adam Wingard
Streaming: HBO Max
Two of cinema’s biggest Titans finally go head-to-head in an epic smackdown. While the fights between the mythical rivals more than deliver, ‘Godzilla vs. Kong’ itself is far more interested in the human elements, which tend to be more hit-and-miss.

Unfortunately, this isn’t a two-hour movie of just Godzilla and Kong punching, scratching, smacking, or attempting to shoot beams at each other. There’s a human element that lends itself to the film to help and hinder the creatures along the way, and they’re familiar (and non-CG) faces with familiar problems. They’re meant to give human stakes to the mythical fights they can only witness and, when the film is about to lose the thread on its world-building, they can take a step back to offer exposition. But the biggest issue Godzilla vs. Kong has is that a lot of those human elements just aren’t very interesting or memorable compared to watching two Titans duke it out.

That’s not to say that human characters in a monster movie are essentially useless; when they work, they elevate the monster parts of the movie and we become invested in whether or not they survive. That’s not really the case with Godzilla vs. Kong, which introduces an entirely new cast of characters apart from Monarch head Mark Russell (Kyle Chandler) and his teenage daughter Madison (Millie Bobby Brown), two holdovers from 2019’s Godzilla: King of the Monsters.

A lot has changed since King of the Monsters. Godzilla, once seen as a “savior,” is now viewed as a villain after attacking the tech giant Apex Cybernetics. Kong is forced to stay isolated in a biodome on Skull Island after storms overtook the island. It’s a living situation he clearly detests but is meant to keep him safe, and he trusts no one other than Jia (Kaylee Hottle), a young Iwi girl with who he’s able to communicate by using American sign language. But despite King of the Monsters leading to classified files on the Titan being released, some people like Bernie (Brian Tyree Henry), a conspiracy theorist and podcast host, think that Apex is covering up something major. (Madison is among his keen listeners.)

The who, what, and even why of Godzilla vs. Kong is explained point-blank by many of the human characters over the course of the movie. It involves trying to get Kong to Hollow Earth, a place his ancestors once called home, with Apex technology, and recruiting a geologist (Alexander Skarsgård) and an anthropological linguist (Rebecca Hall) who’s spent years studying Kong (and is known as the “Kong Whisperer”) to help him get there. Apex CEO Walter Simmons (Demián Bichir) charts the mission while giving his daughter Maia (Eiza González) the reigns. Searching for answers and her father disapproving of her delve into conspiracy theories, Madison gets her friend Josh (Julian Dennison) to help her find Bernie.

Slowly but surely, the pieces start to come together. But Godzilla vs. Kong does little to make us care about most of those pieces—one of the film’s strongest bonds is Titan-tangential, that between Kong and Jia—or even engage with the info dumps they reveal. After a certain point, the motivations or the circumstances that get Godzilla and Kong to a place where they want to kill the other don’t even really matter.

The result of these smackdowns (yes, there is more than one fight between the Titans) is an incredibly detailed feast that I can only imagine looks incredible on a big screen. You can see the scales and speckles of gray across Kong’s chest and almost feel the reverberations of a well-aimed swipe or punch that one gives another. Each fight—one on a ship in the middle of the sea, the other in the middle of a neon-lighted city—takes advantage of its surrounding environments.

If you’re only tuning into Godzilla vs. Kong for that aspect, it’s well worth the watch. It’s an age-old dance brought to life between motion-capture performances and post-production, and even if we know what went into making it happen, that doesn’t break the “reality” that Godzilla vs. Kong depicts.

While some of the larger messages it attempts to convey become lost within its own plot, as a monster vs. monster movie, it’s a total knockout.

Godzilla vs. Kong is now in theaters and streaming on HBO Max until April 30, 2021.