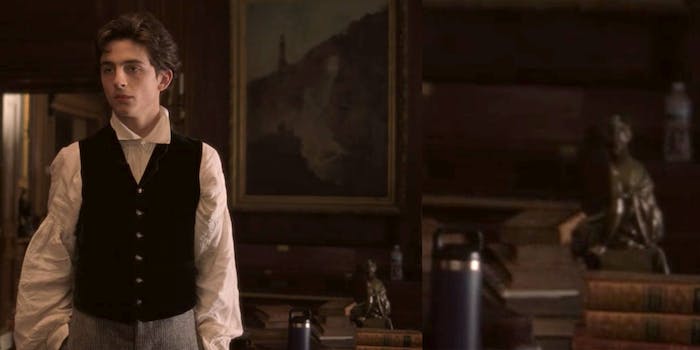 First 'Game of Thrones,' now this?

Greta Gerwig’s Little Women remake earned rave reviews upon its release in 2019 for its strong acting and artistic liberties while still retaining a reverence for its source material. Yet one scene contains two subtle props that are driving fans wild: a water bottle and a Hydro Flask.

The contemporary objects appear in an early scene, where Meg, Jo, Amy, and Marmee meet their neighbor, Laurie (Timothée Chalamet). Spotted behind Chalamet, resting atop 19th-century furniture, are the Poland Spring water bottle and Hydro Flask.

TikTok user and Little Women superfan Madelyn Rancourt posted a video of her findings on the app. Despite seeing Little Women seven times in theaters and presumably watching it many times at home, Rancourt didn’t notice the water bottle and Hydro Flask until many months after the film’s release. Her video quickly went viral, accumulating nearly 92,000 views and 20,000 likes this week.

Many Twitter users noted the gaffe as well; @DUNENATION zoomed in on the Hydro Flask over a series of photos that have earned 160,000 likes and 16,600 retweets since Saturday.

Other reactions to #WaterGate (wait… nvm) ranged from bemusement to not-so-mild hysteria. Some fans were jealous of the Hydro Flask. Others had barely recovered from the Game of Thrones Starbucks cup, and now they to grapple with another cinematic anachronism. Some went full galaxy brain and theorized that the filmmakers left the bottle and Hydro Flask in the shot as Easter eggs to drive conversation. It was all a lot to handle.

Will the internet ever recover from the Little Women water bottle scandal? Hard to say. In the meantime, as fans reel from the news, you could certainly do worse than revisiting the film yourself. The Daily Dot’s Gavia Baker-Whitelaw called it “a pitch-perfect work of cinema, offering thoughtful social commentary from an all-star cast.”