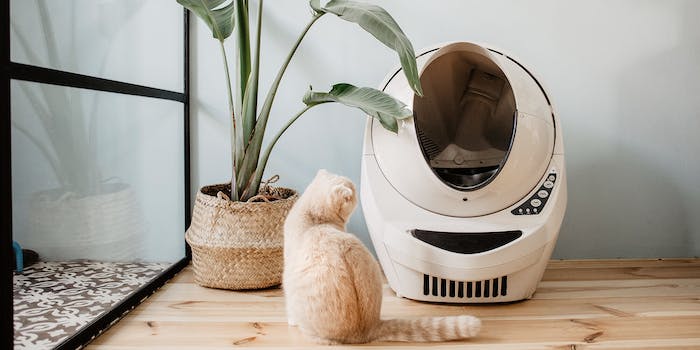 Next time you swoon over how cute a kitten is and think about taking it home, I want you to stop for a minute and think about what you’re really doing, which is making a commitment to having an up close and personal relationship with its poop. By up close, I mean sniffing it, scooping it, and being a lot closer to poop than you probably want to be. Gaze into that kitten’s eyes again. Still ready to be a pet owner?

Of course, a lot of us say yes (me included) and resign ourselves to daily box scooping, wearing gloves, and trying not to breathe when we do our duty. In a technologically savvy world, you’d figure that someone would come up with a better solution. And of course, someone did. It’s called the Litter-Robot, and most cat owners have seen it by now because it has quite the eye-catching profile. It’s been reviewed a bunch, and pet owners seem to like it. But with a $449+ price tag, it’s also one hell of a ding on your credit card. I’m not even sure the toilet I use cost that much.

Of course, it was easy to be a skeptic without having tried the damn thing. A few days after setting the unit up in my home, I realized I had been living like a savage. Because not having to scoop poop anymore since the box does it for you sounds great on paper, but boy, the actual experience is a joy on an all new level. I own three cats, and let me tell you, they might be cute and the loves of my life and all that, but they also produce quite a bit of foul-smelling waste in a 24-hour period. I am even guilty of muttering my regret over adopting them as I clean yet another mountain of it (I didn’t mean it, I love you all, cats).

For those of you unfamiliar with the product, the Litter-Robot is a sphere-shaped box that automatically cleans itself each time a cat uses it. Once your cat exits, the sphere turns on its axis and moves the waste to a separate compartment of the unit where it’s disposed into a plastic bag. The unit then returns to its original position, leaving no smelly poop behind. One of the other advantages of this is that your cat has as little paw contact with the dirty litter as possible, which is a godsend for all the furniture it walks on after the fact.

So, real talk: figuring out who should scoop the litter box and when was a real point of contention between my husband and I. No one wants to scoop it, so it inevitably got put off. If one person had to scoop it more than the other, they were peeved about that. The Litter-Robot completely erased that problem. You can set up the Litter-Robot 3 Connect model (which is the one we have) to send a notification when the bag is full, and all you do it take it out and dispose of it. If you have one cat, this will probably happen once a week. Since we have three, it happens a bit more–but it’s still light years better than getting down on your hands and knees to scoop multiples boxes every day. And the Litter-Robot is appropriate for a household with three to four cats, so if you’re running a full-time cat cafe at your house you’ll need a second unit or an additional litter box.

Getting your cats to understand that this futuristic-looking space dome is their new toilet can be a mixed bag, depending on your animals’ ages and how skittish they are. My kitten and five-year-old cat waltzed right in after a day or two of looking at the box. My 13-year-old, however, is too afraid to use it since it does make a whirring noise when it does its cleaning procedure. I can’t blame this on the Litter-Robot as this particular cat is afraid of everything and hides constantly, but it is worth noting that some cats will adapt easier than others. The folks at Litter-Robot recommend Cat Attract litter, which does exactly what the name says very well.

If you like your gadgets to be customizable, the Litter-Robot 3 Connect is the way to go. The regular Litter-Robot 3 is cheaper at $449, but it does not have the wi-fi feature that allows you to pair the unit with an app that will notify you when it’s time to change the bag. There is a light on the unit that will also let you know when it is full as well. However, if you prefer that option to getting yet another notification, no one could really blame you.

The Litter-Robot is a luxury product, which means it has much nicer accessories than what cat owners are used to. You can add a set of steps to your unit to make it easier for the cat to get in and out ( I recommend them), trade your litter mat for a classy Persian-inspired one, and even house it in some beautiful, heavy duty furniture. It blended so well into my living room it looked like I just had a really nice wine cabinet set up (but surprise, it’s poop!).

Litter-Robot also sells all the major components of the unit, so if something breaks after the 18 month warranty expires, you can easily repair or replace the issue without having to get a new unit. An extended warranty is also available for purchase for $49.99. Considering the price tag of the unit, this gives me the assurance that my Litter-Robot will be with me and my poop-happy cats for some time to come.

Going back to manual scooping is, as the great Vizzini once said, inconceivable. I personally enjoy my 70 extra minutes a week for everything from draining my Netflix queue dry to contemplating when I can ever go to a restaurant again without fear of the plague. Some things are just worth splurging on, and I have learned that the Litter-Robot is one of them.